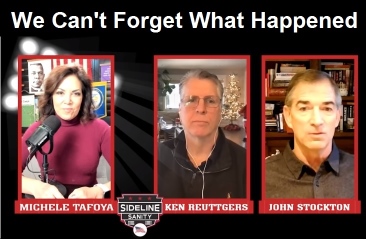 ‘Died Suddenly’? More Than 1-in-4 Think Someone They Know Died From COVID-19 Vaccines

Nearly half of Americans think COVID-19 vaccines may be to blame for many unexplained deaths, and more than a quarter say someone they know could be among the victims.

The latest Rasmussen Reports national telephone and online survey finds that (49%) of American Adults believe it is likely that side effects of COVID-19 vaccines have caused a significant number of unexplained deaths, including 28% who think it’s Very Likely.

Twenty-eight percent (28%) of adults say they personally know someone whose death they think may have been caused by side effects of COVID-19 vaccines, while 61% don’t and another 10% are not sure.

Forty-eight percent (48%) of Americans believe there are legitimate reasons to be concerned about the safety of COVID-19 vaccines, while 37% think people who worry about vaccine safety are spreading conspiracy theories. Another 15% are not sure. (Full article.)

In an interview published last month (December, 2022), former NFL sideline reporter Michele Tafoya, who now has her own show based out of Minnesota titled “Sideline Sanity,” interviewed two former professional athletes who attained stardom in their respective sports: John Stockton who is a Hall of Fame NBA guard who played for the Utah Jazz, and Ken Reuttgers, the former center who played for the Green Bay Packers championship teams.

This is a great interview about how all three have endured ridicule and attacks for their stance on the COVID shots in the world of professional sports.

Ken Reuttgers has been featured with Senator Ron Johnson in going public with his wife’s crippling COVID-19 “vaccine” injuries, which obviously means they were pro-vaccine before she suffered from the shot.

John Stockton, on the other hand, makes it clear that “this is true with all vaccines” and that he knew about the danger of vaccines long before COVID hit, and was well prepared for the propaganda and fraud that unfolded with COVID.

This is a very important distinction to consider as the public continues to wake up regarding the criminal actions and fraud that have occurred with COVID-19 “vaccines.”

Stockton has kept a list of athletes who have dropped dead on the field after taking a COVID shot, and he said the total now is probably “in the thousands.”

While Ken Reuttgers and others like him add a valuable voice to this discussion, someone like John Stockton is in a much better position to discuss the larger issues involved in this fraud, and you can clearly see that in this interview as he explains that the larger issue today is not what side of the vaccine debate you are currently sitting on, but how Americans so freely gave up their freedoms due to the fear created by COVID.

He mentions how the World Health Organization, for example, is preparing their “Pandemic Treaty” that is being designed to override the sovereignty of the United States and other countries by developing a global response to future pandemics, and the use of a “vaccine passport” that will be required for international travel.

Michele Tafoya recalls how she simply asked a question on her Facebook Page one day, pointing to an article published that interviewed a credible medical doctor who explained that early treatment with existing drugs, like Hydroxychloroquine, was having great success in treating COVID patients. She simply asked: Why aren’t we listening to these doctors?

She recounts how she was vilified on Facebook, even by close friends and family members, simply for asking a question, which prompted her to leave Facebook for a while.

I think her most profound statement of the whole interview was: “We can’t forget what happened.”

Here is the whole interview which is still on YouTube without that many views. Let us know if it disappears and we will post a copy on our video channels.