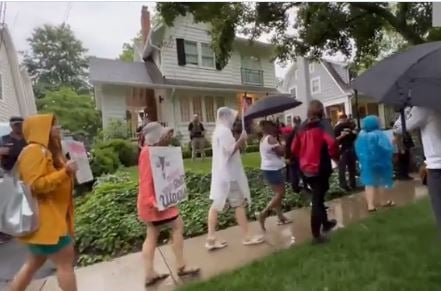 Angry godless protesters gathered outside of Justice Kavanaugh’s home on Wednesday night chanting, “Keep your rosaries off my ovaries.”

The chant displays their hatred and disrespect for the Catholic Church and people of faith.

The protests took place tonight when hours earlier a California man was arrested in the assassination attempt of Supreme Court Justice Brett Kavanaugh. The man told authorities he planned to break into Kavanaugh’s home in Maryland and kill the justice–and then kill himself. The incident started when the man was dropped off by a taxi in front of Kavanaugh’s home carrying a backpack and a suitcase but he was apparently deterred by the presence of two U.S. Marshals and walked away from the house. The man allegedly called 911 to report he was suicidal and had a firearm with him and had traveled from California to kill a Supreme Court Justice.

But that didn’t stop protesters from threatening Justice Kavanaugh and his family tonight in front of his home.

A small group of pro-abortion protesters are outside Justice Kavanaugh’s home to demonstrate about the potential overturning of Roe v. Wade. Police formed a line in front of the home. pic.twitter.com/SdV4Rbrg44