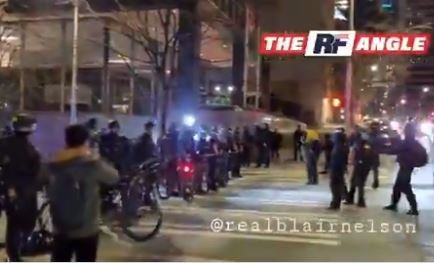 homeless ANTIFA organizer was nearly in tears last night after the terrorist group’s riot tactics were unsuccessful on the anniversary of the death of Breonna Taylor.

They expressed her disappointment over the poor tactical decisions made by the group and mentioned that they should have done more to prevent police arrests 1/3 pic.twitter.com/jweoWEuzep

local was attacked directly prior to Niko, ANTIFA organizer having a mental breakdown.

In the first video, she can be heard voicing her frustrations with the group and failed tactics that led to multiple arrests.

They even admit that there are far more white people there than Black people 2/3 pic.twitter.com/PDqNR2C0WZ

It’s not easy for me to just be out here everyday because remember i’m fucking homeless.“

“Everything we did today, was NOTHING for Breonna Taylor.”

“Name one thing you did today that was good for Breonna Taylor. That shoud show that she should get justice. What? Ni**as running up the stairs when there’s disabled people in our group?”

“There’s 8X as many White people in this crowd than there are Black people.”

And to top it all of someone faints at the end of the video 3/3 pic.twitter.com/6iUSVodJYj

To top the heated rant off, a rioter in black bloc passes out.