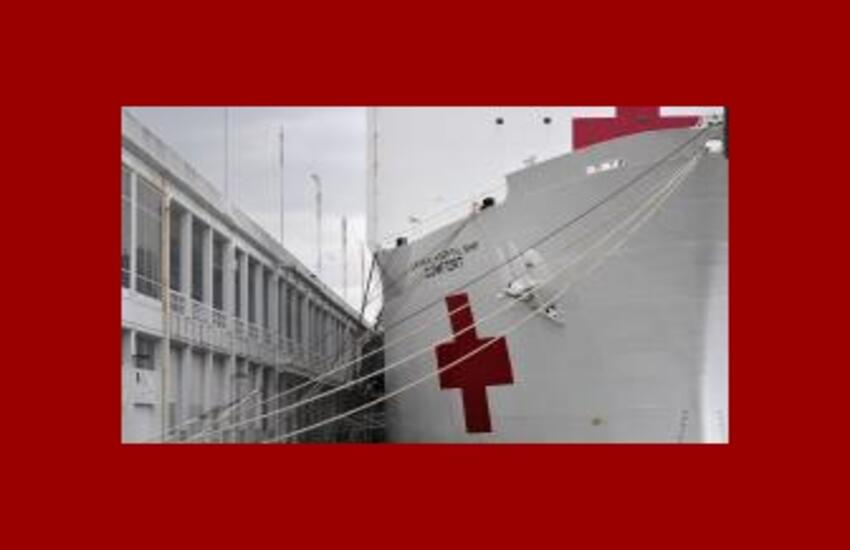 The USNS Comfort ship returned from New York during the pandemic, having used under one-fifth of its beds. (Photo credit: ANGELA WEISS/AFP via Getty Images)

The news media have been covering the COVID crisis for almost a year now, but it seems Americans can be sure of only two things as a result of that exhaustive coverage. The first is that COVID is bad. The other is people should wash their hands. Otherwise, the nation remains confused, skeptical, and in many ways, demoralized.

It is not the fault of the media, of course, that COVID spread throughout the world. But the media establishment bears primary responsibility for providing the flow of information to the nation’s citizens. The media’s emotive, distorted, and disjointed news coverage has helped create the COVID societal disorientation in which the nation now suffers.

“When distant and unfamiliar and complex things are communicated to great masses of people, the truth suffers a considerable and often a radical distortion.”

While it is obvious the COVID story has challenged the media in unique ways, it is just as clear the media failed to step up its game in order to best serve the nation’s news consumers. Lippmann said complicated stories confused the media, “The complex is made over into the simple, the hypothetical into the dogmatic, and the relative into an absolute.” Lippmann predicted exactly what has happened with the media’s coverage of COVID.

COVID challenged news producers and editors in unique ways, but COVID wasn’t making the journalistic decisions. It was news producers who decided to flood every television screen with death count dashboards, but failed to provide context to what became incomprehensible statistics. It was the media that turned Trump’s COVID pressers into brawling fiascos that did little to serve the public’s information needs but did raise the profiles of certain reporters. It was the media that lionized New York Gov. Cuomo as the political counter to the White House, even though Cuomo’s state was suffering disproportionately from the virus. It was the media that decided to traffic in Chicken Little warnings, scaring people with a hysteria that at once burned hot, but had to lead eventually to skepticism and exhaustion.

The media decided to cheerlead for lockdowns and stereotype the voices of opposition as crazy science deniers. No on-screen scoreboards were generated for the collateral damage of lockdowns – suicides, drug overdoses, crime surges, business failures, and uneducated children.

Journalists decided that “science” could be used as the perfect rhetorical shield for any government official’s declaration. The unquestioned god of “science” rationalized any and all decisions about which businesses could stay open, who could travel, which kids could go to school, and so on. Even now, the media salute President Biden for his dedication to science. Biden recently said his administration’s COVID strategy is “based on science, not politics,” adding the decisions will be “strictly based on science and healthcare alone…not what the political consequences are.” Most media outlets reported that declaration with a straight face.

It is interesting to note that lockdowns in New York, Chicago, and elsewhere were supposedly driven by science, but now even with the virus still running strong, Cuomo and Chicago Mayor Lightfoot are moving to reopen. Even the venerable Dr. Anthony Fauci, who presumably would be most committed to “the science,” recently had to admit that he had been moving the goalposts on herd immunity. “Science” doesn’t decide anything. Politicians, and yes, even scientists do, and those decisions are based (duh) on political consequences.

The media’s obsession with science deludes the public and gives cover to politicians. A brilliant rhetorician of the twentieth century, Kenneth Burke, observed that all science is associated with interest groups or power structures that themselves are quite unscientific in their purposes. He wrote, “A science takes on the moral qualities of the political or social movements with which it becomes identified.” Thus, the powerful can do whatever they want, then use the socially approved shield of science as justification.

A recent Rasmussen Reports poll found that only 28% of Americans think the nation is winning against COVID, even after a vaccine rollout and improvements in treatment. A December PoliticalIQ poll reported that six in ten Americans believe the worst of the pandemic is still to come, the exact same ratio that was reported back in April. That’s media-induced fear and hysteria speaking.

Many factors affected how the nation dealt with the deadly pandemic. But it is clear the media’s frenzied and disruptive performance inhibited the public’s understanding of the pandemic and altered the collective efforts of the nation to respond to the virus in a measured manner. The nation has suffered greatly during this horrible pandemic and media malpractice has contributed to that suffering.

Jeffrey M. McCall is a Professor of Communication at DePauw University.  He is a recognized authority on media and journalistic ethics and standards, having been interviewed and quoted by over 125 newspapers. He has made over a hundred appearances on radio and television shows.  He is a contributing op-ed columnist on contemporary media issues, and is the author of the book “Viewer Discretion Advised: Taking Control of Mass Media Influences.”