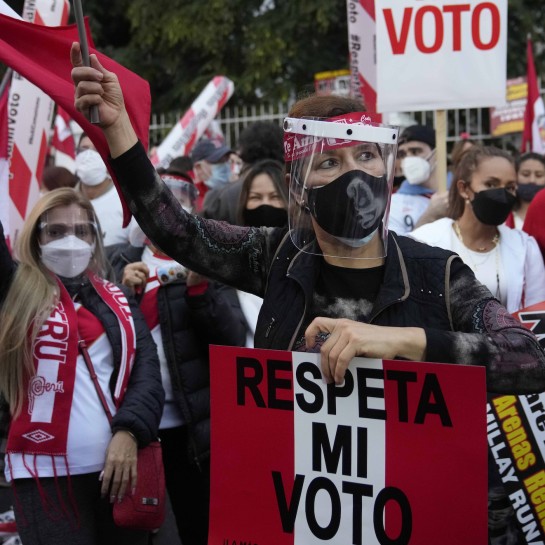 My native Peru has begun its descent into hell. Western embassies are besieged by people seeking visas. Capital flight has started. There is talk of a military coup. And the result hasn’t even been declared yet.

As I predicted a couple of months back, the presidential election has been won by Pedro Castillo, an unreconstructed Marxist who wants to kick out foreign companies and confiscate their assets.

Until last year, Peru had been doing enormously well. Per capita gross domestic product had doubled since the millennium, life expectancy had increased from 71 to 76, the number of children completing secondary education had risen from 75% to 100%,and inequality had tumbled.

Then came the lockdown, one of the harshest in the world. The impact on a largely informal economy can well be imagined, yet a curfew enforced by the military failed to prevent Peru from topping the global league table for COVID-19 deaths per million. The coronavirus, like a war, had altered people’s psychology, making them more demanding of big government. Two authoritarian candidates reached the runoff: Keiko Fujimori, daughter of the jailed dictator, and Castillo, whose manifesto openly promised Marxism-Leninism.

By the tiniest of margins — 50.13% to 49.87% — Castillo won. The narrowness of that result has inevitably led to frantic protests and court challenges. I have every sympathy with the demonstrators. It does seem extraordinary that someone can take office in such unusual circumstances, with such a negligible mandate, and then enact the sort of revolution that Castillo proposes, scrapping the constitution, refounding the republic on socialist principles, liquidating Congress, and realigning the country with China.

Human nature being what it is, liberals, conservatives, and democrats of every stripe can’t bring themselves to believe the outcome. Several Peruvian friends, many of them the epitome of reason and moderation, have been calling to ask me to make British and American readers aware of the supposedly stolen election.

The trouble is, there is no evidence that the result was fraudulent. That is not to say that there was no impropriety. We can never definitively say that about any election. But the 150 international observers who scrutinized the process have given it a clean bill of health. That is the test we normally apply and, more importantly, the test both sides had accepted in advance.

Is it unreasonable that a previously successful nation can be destroyed because of 40,000 votes cast desperately during a lockdown? Yes. Is it wrong that the system can now be revolutionized with barely any checks? Absolutely. Is it scary that Peru is set to follow Venezuela? You bet. But them’s the rules — the rules, to repeat, accepted beforehand by all the candidates.

Once you decide that process should be subordinated to the outcome, you open the door to arbitrary government. That distinction explains why North America is so much richer and more stable than Latin America. The rule of law, pure and simple, is why no Mexican politician has ever had to propose building a wall to keep the gringos out.

Elevating a set of rules over a flesh-and-blood candidate is nonetheless difficult and unnatural, even in countries long habituated to the idea. Consider two recent examples. In 2016, the United Kingdom voted narrowly to leave the European Union. In 2020, the United States voted narrowly for Joe Biden.

In both cases, lots of people on the losing side refused point-blank to accept the verdict, insisting that there had been malpractice. But they were two very different groups of people. British commentators who had spent four years trying to demonstrate that the Brexit referendum had been rigged by the Russians switched seamlessly to condemning former President Donald Trump because he did not accept the verdict. A similar hypocrisy worked the other way around for people on the other side.

Even as I write those words, I sense readers’ disagreement. How can I possibly liken X (a result you happen to favor) to Y (where you detect obvious fraud)? We all tend to see what we want and to regard our own take as the only objective one. Indeed, the really extraordinary thing is that we have managed to sustain a pluralist model for as long as we have.

I used to imagine that, over time, places such as Peru would become more like Britain or the U.S., that democracy would be habit-forming, and that a taboo would grow up around the abuse of power. Now, I know better. The real question is how long it will take before places such as Britain and the U.S. slide into being more like Peru. Even before the coronavirus, the guardrails were buckling under the strain. Next time, we will not be so lucky.