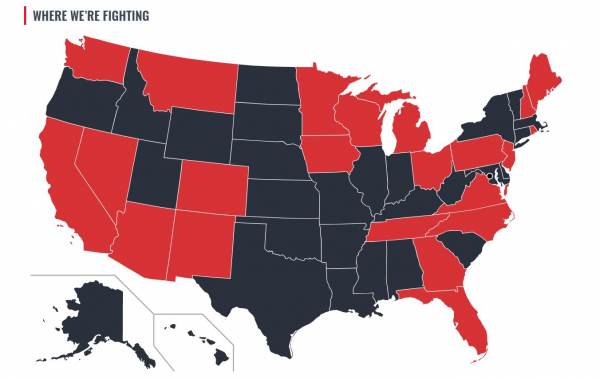 ** The Trump Campaign recently launched the Lawyers for Trump Coalition and the Protect the Vote website.

The Democrats cheered another victory in late September after officials in North Carolina agreed to accept late ballots up until November 12 and to establish ballot drop off stations (ballot harvesting).

The Democrats in Nevada, Michigan and Pennsylvania have also passed similar measures in order to steal the election.

Ballot harvesting is illegal in most states.

In PennsylvaniaMichiganMinnesota and Wisconsin, Democrat activists dressed in black robes have fundamentally rewritten state election laws. Among their various revisions to these crucial laws.

If Democrats were able to steal Michigan, Pennsylvania, Wisconsin and North Carolina they would add 61 electoral votes to their tally and could very likely win the election.

And the ONLY way Democrats can win this year is stealing.

Democrats do not have a message or a candidate.

On Friday a Michigan Court prevented Democrats from accepting late ballots 14 days after the election.

This is wonderful news for election integrity.

Absentee ballots must arrive by Election Day to be counted, the Michigan Court of Appeals said Friday, blocking a 14-day extension that had been ordered by a lower court and embraced by key Democratic officials in a battleground state.

Any changes must rest with the Legislature, not the judiciary, the Republican-appointed appeals court judges said in a 3-0 opinion.

Absentee ballot extensions in Wisconsin and Indiana have also been overturned by higher courts.

Michigan’s ability to handle a flood of ballots will be closely watched in a state that was narrowly won by President Donald Trump in 2016. Secretary of State Jocelyn Benson last week said 2.7 million people had requested absentee ballots, a result of a change in law that makes them available to any voter.