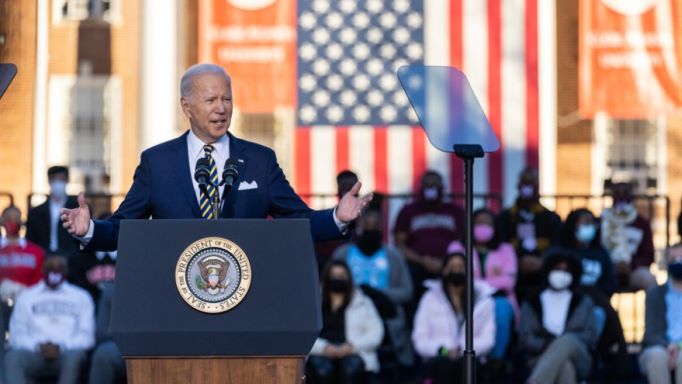 An urgent concern for the country is the continuing threat to our national security posed by a compromised President Biden.

On Friday, The Daily Mail reported that emails recovered from Hunter Biden’s laptop show he helped an infectious disease research company pursue projects in Ukraine. Those emails confirm portions of charges Russia made the previous day that an investment group run by the now-president’s son had funded a company conducting research at biological laboratories in Ukraine.

While these developments add another scandal to the long list of Biden family dirty laundry, the more urgent concern for the country should be the continuing threat to our national security posed by a compromised President Biden and the possibility that Russia has access to the catalog of compromising material contained on Hunter’s laptop.

Mere weeks before then-President Donald Trump and Joe Biden faced off in the November 2020 presidential election, The New York Post published emails obtained from a laptop Hunter Biden had abandoned at a repair shop in Delaware. Those emails revealed that during the elder Biden’s time as Barack Obama’s vice president, Hunter engaged in a pay-to-play scandal, trading off his father’s position to strike deals with players in Ukraine and China. The venture was a family one, with Joe “the Big Guy” Biden listed in one email as set to receive a 10 percent cut of one pending deal and Hunter telling his daughter in another message that “pop” took half of his earnings.

Even after a former business partner of Hunter Biden’s confirmed the authenticity of the emails, the supposed standard-bearers of journalism buried the scandal and social media outlets censored both the story and The New York Post. Worse still, “more than 50 former senior intelligence officials” signed a letter framing the Hunter Biden emails as Russian disinformation.

Among others, former CIA directors or acting directors John Brennan, Leon Panetta, Gen. Michael Hayden, John McLaughlin, and Michael Morell signed the letter. In doing so they gave then-candidate Joe Biden cover to lie to the American public, which he did when Trump confronted him about the scandal during a presidential debate.

“That’s exactly what [I] was told,” Biden countered. “There are 50 former national intelligence folks who said that what he’s accusing me of is a Russian plant,” Biden professed to the American public before they went to the polls and elected Biden our commander in chief.

But even The New York Times has finally admitted the laptop was real and the emails were legitimate. Initially, that admission proved significant because it likewise legitimizes the scandals spawned from the documents recovered from Hunter’s abandoned laptop. However, the trajectory of the scandal changed Friday with The Daily Mail’s exclusive.

“Emails from Hunter’s abandoned laptop show he helped secure millions of dollars of funding for Metabiota, a Department of Defense contractor specializing in research on pandemic-causing diseases that could be used as bioweapons,” The Daily Mail announced last week. The article continued: “[Biden] also introduced Metabiota to an allegedly corrupt Ukrainian gas firm, Burisma, for a ‘science project’ involving high biosecurity level labs in Ukraine. And although Metabiota is ostensibly a medical data company, its vice president emailed Hunter in 2014 describing how they could ‘assert Ukraine’s cultural and economic independence from Russia’– an unusual goal for a biotech firm.”

The Daily Mail added more details about Metabiota and Hunter Biden’s role in brokering relationships for the research company in Ukraine. Included throughout the article were copies of the emails ostensibly obtained from Hunter’s laptop that confirmed The Daily Mail’s reporting. The article also added details shedding light on Hunter’s “business” dealings in Ukraine during the time his father served as vice president and America’s point person on issues related to that country.

Friday’s exclusive is not the first time The Daily Mail has published never-before-seen material from Hunter Biden’s laptop. Last August, the outlet published “unearthed footage” of Hunter Biden telling a prostitute that, in the summer of 2018, another laptop went missing and he believed Russia had stolen it. At the time, Hunter also expressed concern that the laptop might prove fodder for blackmail since it contained compromising material.

What distinguishes the emails contained in last week’s Daily Mail article from those published last year is that the most recent release came the day after Russia’s State Duma speaker, Vyacheslav Volodin accused President Biden with being “involved in the creation of bio laboratories in Ukraine,” with Volodin claiming that “an investment fund run by his son Hunter Biden funded research and the implementation of the United States’ military biological program.”

Soon after Volodin made the charge on Thursday, the Telegraph called Russia’s accusation of Hunter Biden funding Ukrainian biological laboratories an “unsubstantiated claim” “designed to build on negative coverage about [the] president’s son in Right-wing US media.” But with Friday’s release of previously undisclosed emails from Hunter Biden’s laptop, Russia’s claim, at least concerning Hunter Biden’s connection to Ukrainian biological laboratories, appears accurate.

While none of the emails released on Friday support Russia’s claim that the Ukrainian labs were used to research or create bioweapons, propaganda need only hold a sliver of truth to serve its purpose. And the cache of emails contained on Hunter Biden’s abandoned laptop provides Putin and his comrades enough evidence to seemingly confirm the Russian government’s earlier claim that Hunter Biden helped implement a bioweapon program in Ukraine. This false framing also provides Russia ammunition to justify its attack on its neighbor to the west.

Russia’s ability to point to the Hunter Biden emails as confirmation of its claims of a biolab in Ukraine raises a serious question with huge national security implications: How did Russia know the day before The Daily Mail’s exclusive that the Hunter Biden’s investment fund, Rosemont Seneca, had invested in Metabiota and been involved in Metabiota’s operations in Ukraine?

The timing of events last week suggests Russia has access to the same emails as The Daily Mail or that Vladimir Putin’s agents might well have obtained access to Hunter Biden’s first laptop—the one the president’s son believed Russians had stolen in 2018. In either case, the Biden family corruption documented on the laptops has gone from a potential national security risk to a real one—and in the midst of a war launched by Russia on a country bordering North Atlantic Treaty Organization allies.

Together, the Biden family, the intelligence agencies, and the corrupt media—social and legacy—hold full responsibility for the danger Americans now face. Biden knew full well how compromised his family was, and that there were two laptops, not one, with evidence of the corruption floating about. Yet Biden lied to the American public, with an assist from the former high-level members of the intelligence community who signed the letter suggesting the laptop scandal represented Russian disinformation.

Then there is the FBI which, by December 2019, had access to the abandoned laptop and thereby also knew that Hunter believed Russians had stolen his laptop in summer 2018. To date, there has been no indication that the FBI provided Joe Biden a defensive briefing on the national security risk posed by those laptops. Or if FBI agents did brief Biden on the risks in a timely manner, that means he nonetheless lied to the American public and ran for president knowing the propaganda at Putin’s fingertips.

Even when coupled with the complicity of former members of the intelligence community, all of Joe Biden’s lies would mean nothing if the media had done its job and reported the story when it still matter. It’s too late now, however: Biden is our commander in chief and Putin potentially holds a cache of compromising information perfect for propaganda purposes.

Margot Cleveland is The Federalist’s senior legal correspondent. She is also a contributor to National Review Online, the Washington Examiner, Aleteia, and Townhall.com, and has been published in the Wall Street Journal and USA Today. Cleveland is a lawyer and a graduate of the Notre Dame Law School, where she earned the Hoynes Prize—the law school’s highest honor. She later served for nearly 25 years as a permanent law clerk for a federal appellate judge on the Seventh Circuit Court of Appeals. Cleveland is a former full-time university faculty member and now teaches as an adjunct from time to time. As a stay-at-home homeschooling mom of a young son with cystic fibrosis, Cleveland frequently writes on cultural issues related to parenting and special-needs children. Cleveland is on Twitter at @ProfMJCleveland. The views expressed here are those of Cleveland in her private capacity.

This content is courtesy of, and owned and copyrighted by, https://thefederalist.com/ and its author. This content is made available by use of the public RSS feed offered by the host site and is used for educational purposes only. If you are the author or represent the host site and would like this content removed now and in the future, please contact conservativechoicecampaign.com using the email address in the Contact page found in the website menu.