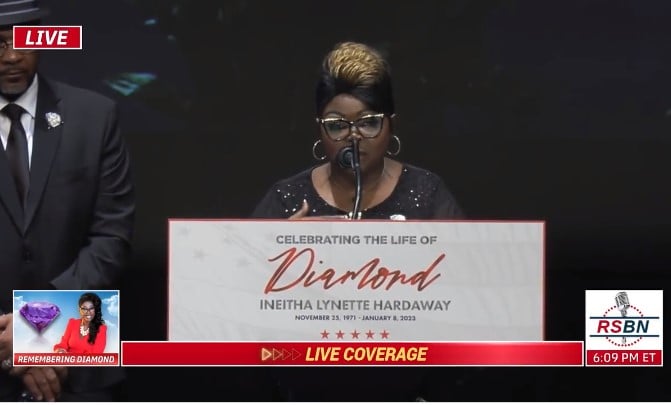 At the Saturday memorial for her sister Lynette “Diamond” Hardaway, Silk told the crowd of supporters, including President Trump, that the vaccine may have been a factor in her sister’s sudden death.

Silk then called for an investigation. “There’s something going on!”

Silk spoke to the crowd on Saturday before President Trump took the stage.

Silk described how her sister “died suddenly” and how she tried to save her.

Silk: As soon as Diamond hung up the phone, she said to me, “I can’t breathe.” It was sudden, out of nowhere and no warning. I got her to the kitchen table, opened up the back door so that she can get some air. And, each breath was less and less and less, until her eyes became a stare… My husband and I followed the 911 instructions from the lady. We laid her. Like they told us to lay her flat. They said do CPR. And it was one-two-three-four, one-two-three-four, one-two-three-four… My husband and I alternated and kept going and going and going, until the emergency truck came into the yard and the EMS came into the house. They did everything that they could.

So what I want to say to everybody is don’t you dare call me a conspiracy theorist. Because I saw it happen. I saw how it happened. I was there when it happened and it happened suddenly. I want America to wake up and pay attention. Something ain’t right. It’s time to investigate what’s really going on here! And get some answers to why our people of falling dead suddenly.

Silk then went on to say, “Instead of asking if Americans are vaxxed or unvaxxed the real question is are they being poisoned.”

Via DC Draino and RSBN.

This is horrible to watch

Diamond said she couldn’t breathe and then died suddenly

Why does this keep happening?!

Why do healthy Americans keep dying suddenly out of nowhere?!pic.twitter.com/OP4acnlxwq