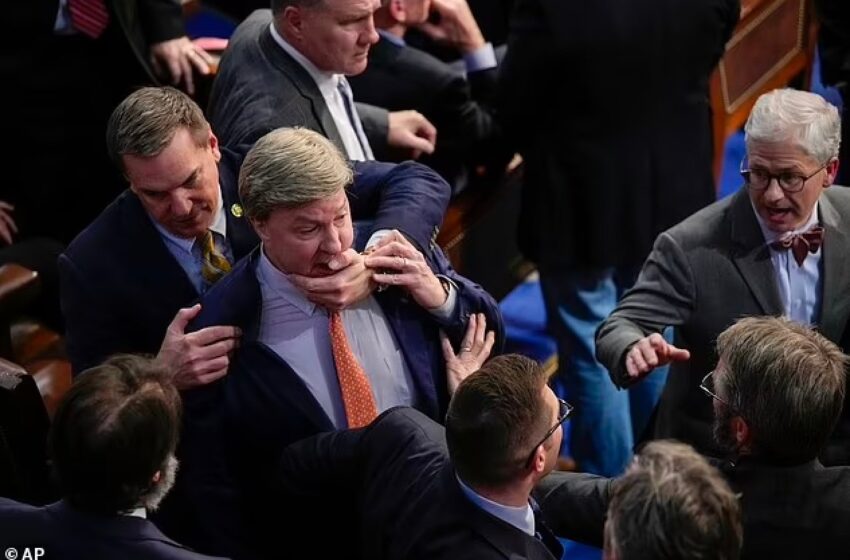 As reported earlier by 100 Percent Fed Up – After four days of voting on the House floor for the next speaker, tempers flared tonight when Republican Rep.Mike Rogers of Alabama lunged at Rep. Matt Gaetz (R-FL), the congressman who’s been leading the effort to prevent Kevin McCarthy from becoming the next Speaker.

Chaos ensured on the House floor as the 14th vote for Speaker fell short by one vote for McCarthy.

Daily Mail reports – McCarthy immediately walked up to Reps. Matt Gaetz and Lauren Boebert, presumably with the intent of persuading them to change their ‘present’ votes to ‘yes.’

Rep. Mike Rogers of Alabama then lunged at Gaetz and had to be held back by Rep. Richard Hudson before an all-out fistfight could break out on the House floor.

The Republican lawmaker from Alabama, a member of the House Steering Committee responsible for making committee chair recommendations, recently threatened the holdout Republicans who don’t vote for McCarthy that they will be stripped of committee assignments.

On Saturday we learned that there may have been some drinking involved before the fracas.

According to Burchett, who was standing next to Rep. Rogers during the heated exchange, had this to say, via Mediaite,

“Tim Burchett, who was in between Matt Gaetz and Mike Rogers during their confrontation on the House floor, tells me Rogers was making threats about ending careers. “People shouldn’t be drinking, especially when you’re a redneck, on the House floor,” Burchett said.

“I would drop him like a bag of dirt,” Burchett said of Rogers. “Nobody’s gonna put their hands on me. Nobody’s gonna threaten me.”

“It’s just one of those things — you’ve been around fights before, you’ve seen it. Some guy gets in your face and then it’s just an unfortunate moment is all it was. It shouldn’t have happened. He shouldn’t have crossed that line,” Burchett said.

“I would drop him like a bag of dirt,” Burchett said of Rogers. “Nobody’s gonna put their hands on me. Nobody’s gonna threaten me.”

“It’s just one of those things —