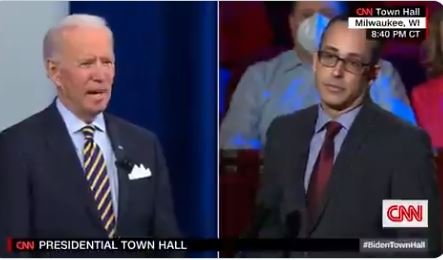 This did not make any headlines by the leftist media.

Among his many gaffes, Joe Biden on Tuesday blamed US veterans and former police officers for fueling white supremacy in the United States.

Again, the media hid this from the American public like they always do.

The left hates the military, hates the police but will stealtheirvotes if they get a chance.

Joe Biden is a pig.

President Biden took aim at the very same Americans who dedicated their lives to keeping the country safe.

“And you see what’s happening — and the studies that are beginning to be done, maybe at your university as well — about the impact of former military, former police officers, on the growth of white supremacy in some of these groups,” the President said.

“You may remember in one of my debates with the former president, I asked him to condemn the Proud Boys. He wouldn’t do it. He said, ‘Stand by. Stand ready.’ Or whatever the phrasing exactly was,” he recalled.

“It is a bane on our existence. It has always been. As Lincoln said, ‘We have to appeal to our better angels,’” President Biden said.