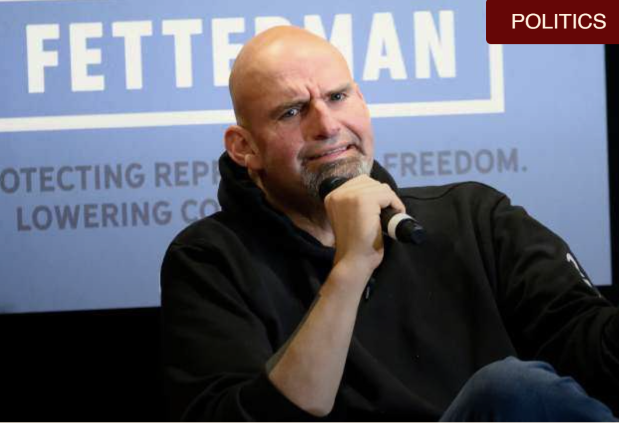 In hidden-camera footage, a “committee person” identified as Rudy Stewart can be seen presenting papers to the undercover PV journalist titled “Official Democratic City Committee Ballot” for the 2022 general election in Philadelphia County.

At a later point in the video, Stewart points to the name of Fetterman’s Republican opponent, Dr. Mehmet Oz, in a list of candidates that is pinned to the wall and states, “We’re scared of him.”

“I am scared of him. We’re scared of him,” Stewart says, gesturing to Oz’s name and also to Republican governor candidate Doug Mastriano’s.

“So do not vote for them?” the undercover journalist asks.

The Philadelphia County training guide for election board officials clearly states that “handing out campaign materials” and “telling voters which candidates to support” are examples of illegal electioneering, as Project Veritas points out.

PV founder James O’Keefe also noted that at the entrance of the polling center in the video were pro-Fetterman and pro-Shapiro campaign posters.

Another committee person, identified as James Harrison, chimed in to say “I just help whoever the majority of the community supports.”

Harrison replies, “If you vote Democrat, all of them are the Democratics. They only got one against one.”

This is blatant electioneering and it is illegal. There is no way that these men were not aware of the fact that they were breaking the law. Surely they were trained on how to conduct themselves while assisting at the polls.

The Senate and governor races in Pennsylvania ended up being two of the most confusing outcomes in the entire country. Shapiro won the race against Mastriano by double digits which might not be that shocking considering the left zealously opposed Mastriano and made every effort to slander and smear him from the second he won the state’s primary until the general election on Tuesday.

Meanwhile, Dr. Oz just barely lost to Fetterman but Fetterman is a man more brain-damaged than Brain-Dead Biden himself. After suffering a stroke back in May, it is clear Fetterman has a long way to go on the road to recovery.

He can barely string together coherent sentences and requires a special closed captioning system in order to understand what other people are saying to him.

Somehow this man was able to beat a celebrity heart surgeon who is both articulate and dedicated to pro-American, conservative values in a state where blue-collared, hard-working Americans are seriously hurting under the radical left’s anti-energy plan.

If there were ever a reason to do away with early voting and get back to paper ballots and in-person voting, Pennsylvania has proven it with the election of Knuckle-Dragger, John Fetterman. By the time Fetterman gave his utterly embarrassing and abysmal debate performance, thousands of Pennsylvanians had already cast their mail-in ballots for him.

How many of these people would have ultimately voted for Dr. Oz had they known just how cognitively damaged Knuckle-Dragger, John Fetterman truly is?

On top of the fact that the mail-in ballots are open season for fraud and election shenanigans, how many poll workers around the state were engaging in illegal electioneering at the polls?

Pennsylvania is a mess and will continue to be until leaders in the state can return to common sense election procedures. Unfortunately, now that the midterm elections have come and gone and both radical leftists on the ballot won, it looks like that may never happen.

Click this link for the original source of this article.
Author: josh

This content is courtesy of, and owned and copyrighted by, https://www.libertybell.com and its author. This content is made available by use of the public RSS feed offered by the host site and is used for educational purposes only. If you are the author or represent the host site and would like this content removed now and in the future, please contact USSANews.com using the email address in the Contact page found in the website menu.