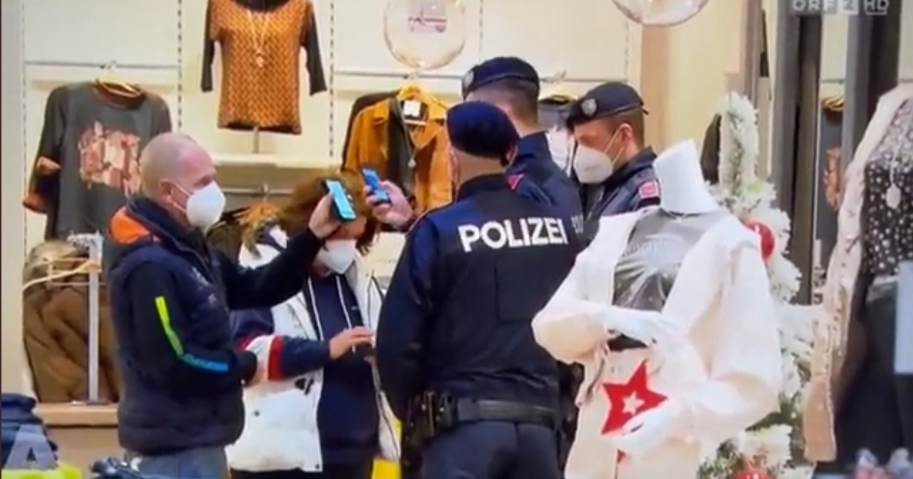 This week, Austrian President Alexander Van der Bellen imposed new Covid restrictions that require all adults in the country to be fully vaccinated and boosted or risk being fined.

The new authoritarian law runs through January 31st, 2024, and will go into effect next month.

Beginning on March 15th, law enforcement authorities will begin checking people’s vaccine status by conducting random traffic stops, and spot checks, in order to find dissenters. Anyone caught violating the mandate can be fined “up to four times a year,” with the penalty increasing with each violation. An individual’s first offense will result in a €600 (~$687) fine and can go as high as €3,400 (~$3,890) by the fourth.

The new law also allows the Austrian government to create a dystopian vaccine registry that will record everyone who has been vaccinated and give those who have been found disobeying a date they must be vaccinated by, allowing the government to fine them repeatedly.

Only certain people will be exempt from the mandate, including pregnant people, those with health conditions affected by vaccines, and those who have been previously infected with COVID-19, according to SchengenVisaInfo News.

The latest health data from the European Centre for Disease Prevention and Control (ECDC) shows that almost 73% of the Austrian population is two-dose vaccinated, with just over 54% having received the booster shot. But thanks to another mandate that went into effect earlier this month and requires a booster shot to be in compliance with government requirements, nearly 3.8 million Austrians will be impacted by the new law.

Unfortunately, not all of them will be able to provide proof of natural immunity. The World Health Organization has estimated a total of 1,968,963 Covid cases in the country since the beginning of the pandemic, which includes boosted individuals. Even if you account for all of the undocumented cases, there will still be countless Austrians that will be punished for not taking the experimental jab – and the booster, and the next booster, and so on.

The Austrian government also shortened the period in which vaccinations remain valid. Now, citizens are required to receive their next dose about 90 days earlier than before.