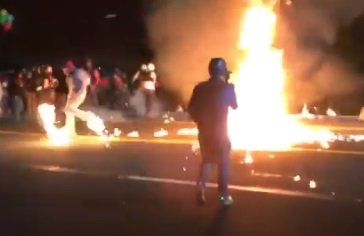 On the 100th night of riots in Portland, one of the far-left militants threw a Molotov cocktail in an attempt to hit police… but lit his fellow rioter on fire instead.

Ironically, police officers had to step in to help them put it out.

Graphic: #Antifa rioters throw a Molotov cocktail in direction of police in SE Portland. It lands next to people, setting one on fire. Video by @TaylerUSA#PortlandRiotspic.twitter.com/NJfEURKfkC

After the man dances away from the explosion with his feet on fire, fellow rioters can be heard telling him to “stop, drop, and roll” and urging him to take his shoes off.

The rioters have been taking their chaos and mayhem to residential areas for their 100th night of terror.

The riot is ongoing and Gateway Pundit will be providing updates as the situation unfolds.