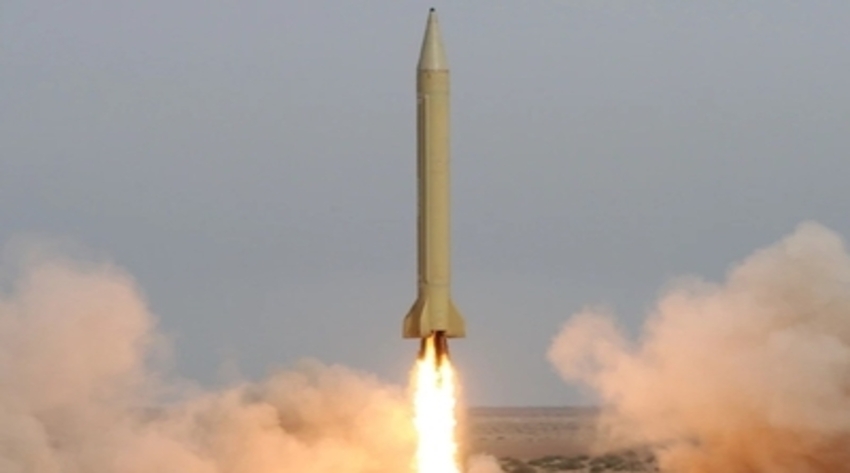 Three weapons systems form a triangle at the heart of the Islamic Republic’s program to entrench itself in the Middle East. Precision-guided missiles, unmanned aerial vehicles (UAVs), and surface-to-air missiles are finding their way into increasing areas, and into radical hands.

Iran is present in several Arab states suffering from weak sovereignty, infiltrating with proxy forces, arms, and money. Now, Tehran hopes to be able to spread its fundamentalist Shi’ite agenda with greater force, by equipping its proxy forces with new levels of military systems.

Supreme Leader Ayatollah Khamenei’s goal is to paint as much of the regional map in Iranian colors as it can, reaching eventual hegemony, and to bring down any state that stands in his way, whether Jewish or Sunni. Those investments are evident in Yemen, Gaza, Iraq, Syria, and Lebanon. As the ballistic missile attack on Saudi capital Riyadh on Monday illustrates, the firepower that Iran spreads around the region does not remain in storehouses.

Iran manufactures advanced weapons, and the Quds Force’s regional smuggling network then distributes them to the proxies. Iran thereby becomes more threatening to the security of America’s key allies in the region, including Israel, Saudi Arabia, the United Arab Emirates, and Jordan.

Whereas in the past, Iran would mostly smuggle simple mortars, rockets, and IEDs to its radical proxies, today, the Iranian smuggling networks funnel far more advanced technologies to the wrong hands.

This means that Iran’s proxies, such as an Iranian-backed Shi’ite militias in Iraq, can decide to fire sophisticated ballistic or cruise missiles at Riyadh or Tel Aviv, from the same Iraqi launchpads.

The fact that Iran’s proxies have some level of independence in their decision making, while still being obligated to take orders from the Iranian “mother ship,” merely adds to the instability.

The strike range of these weapons grows with time, the warheads become larger, and the activity further destabilizes regional security.

The precision-guided missiles that Iran makes for itself and its proxies provide long-range strike capabilities that were once reserved for the great powers. Some of Iran’s ballistic, cruise missiles, and UAVs can reach ranges of 2,000 kilometers. Iranian pledges to not go past that range are undermined by its space program, which many observers suspect doubles up as a testing program for future intercontinental missile systems.

Meanwhile, Iran’s surface-to-air missile batteries can challenge the activities of any air force seeking to monitor or strike Iranian-backed ground targets. And the Iranian UAVs portfolio form a long-range, accurate strike tool that, when used in swarms, can pose severe problems even for advanced air defenses, as recent incidents, such as the suicide drone strike on the U.S. military base in al-Tanf, southeast Syria, have illustrated.

Iran is also able to hide behind the excuse that its proxies fired the weapons – even when the attack originated from Iranian territory, such as the 2019 drone attack on Saudi Arabian oil facilities at Abquaiq and Khuaris, which reduced Saudi oil exports by 50 percent.

It is harder to trace the origins of maneuvering, low flying weapons like cruise missiles and UAVs, meaning that the presence of multiple “immediate suspects” makes using those weapons more attractive in Iran’s increasingly bold grey zone operations. They can be used to terrorize civilians in cities, reduce oil production, target international maritime traffic, paralyze seaports and airports, and hit power plants. The list goes on.

The fact that Iran’s suicide drones are now able to hit moving targets, like a civilian oil tanker, was demonstrated in a lethal manner in the July attack on the Mercer Street ship in the Sea of Oman.

In an additional twist, Iran has placed a new emphasis on attempts to get its proxies set up with their own domestic weapons production capability, in order to evade disruptive actions, such Israel’s ongoing preventative strike campaign.

In Lebanon, Hizballah controls precision-guided missile factories, allowing it to assemble its own missiles on Lebanese territory and not rely on Iran for imports, representing one of the most dangerous scenarios for Israel. In fact, Israel has repeatedly warned that it cannot allow Hizballah to have its own domestic defense industry, due to the instability and threat this would pose to key strategic sites in Israel.

The ability to target multiple sensitive sites at the same time could, in theory, shut down a modern country’s very ability to function. This is due to the fact that some radars and interception missiles can struggle to deal with multiple attacking UAVs that come raining down in a swarm. This makes UAV swarm a strategic threat, since they can be used to shut down key sites.

In Yemen, too, Iran has been working to install a “locally made” industry of weapons so that the Houthis can arm themselves and threaten international shipping in the Arabian Sea, Gulf of Aden, and Red Sea. These same Yemen-based capabilities are routinely used to threaten Saudi Arabian sovereignty, and even the Israeli Red Sea city of Eilat, 2,000 kilometers away.

In dealing with these threats, cooperation appears to be on the rise among Israel and Sunni states, as well as with the United States. In April, the U.S. and Israel set up an inter-agency working group “on the growing threat of unmanned aerial vehicles and precision guided missiles produced by Iran and provided to its proxies in the Middle East region,” reflecting the high priority this is receiving in Washington and Jerusalem.

Israel has a multi-layered air defense system to deal with UAVs and precision-guided missiles, featuring some of the most advanced technology in this sphere in the world.

This structure includes a host of sophisticated radars, and the ability to intercept the threats – whether through ground-launched missiles or fighter jets – as they enter Israeli air space.

The UAV fired at Israel from Iraq in May is a case in point. In that incident, the UAV approached Israeli airspace near the northern city of Beit Shean. The IDF only stated that it was monitored by Israeli Air Force air control units, and that its fragments had been collected by security forces on the ground. It turns out that this UAV came not from Syria, but from Iraq.

No less remarkably, a UAV that infiltrated Israeli airspace in 2018 from Syria turned out to have been carrying TNT explosives, and was on a delivery mission for terrorists in the West Bank, Defense Minister Benny Gantz revealed last month.

Gant noted that it was launched from Syria’s T4 airbase, near Palmor, which has been under the control of Iran’s Islamic Revolutionary Guards Corps.

Israel continues to optimize its early detection and interception capabilities to defend against these threats, as well staying on top of the intelligence picture.

But Israel’s efforts don’t stop at defense. Since 2013, it has developed a large-scale offensive strike program designed to disrupt Iranian entrenchment activities, and to stop advanced weapons that change the regional balance of power from reaching their intended destinations along Iranian supply routes.

Those routes include the transfer of weapons on the ground, in the air, and at sea, meaning that a major monitoring program must be active 24-7 to be able to detect and respond in time.

Israel’s campaign has stopped many advanced Iranian weapons from reaching their destinations, forcing Iran to look for new tactics – such as getting its proxies to build their own weapons.

Israel’s recent shift into the U.S. military’s CENTCOM, which is responsible for the Middle East, can help facilitate the transfer of technology and capabilities for countering these threats from Israel to pragmatic Sunni countries, as well as create new joint training and intelligence-sharing opportunities.

As Iran prepares to smuggle yet more of its triangle of destruction, the anti-Iranian bloc in the Middle East will be looking for new ways to cooperate in order to defend itself.

This story syndicated with permission IPT