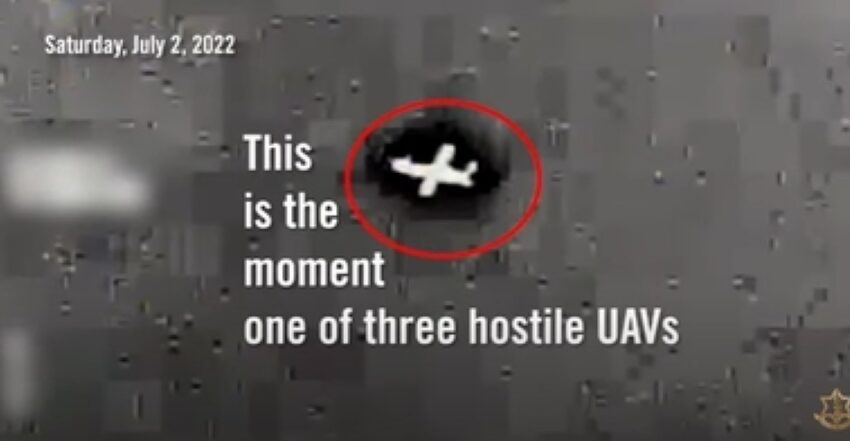 (IDF image) Israel shot down three Hizballah drones last month as they approached the Karish gas field in the Mediterranean.

As Israel fights against the Palestinian Islamic Jihad terrorist group in the Gaza Strip, Iran’s proxies keep up the tension on other possible fronts, threatening to bring the confrontation with Israel on the high seas. Now Iran – through Hizballah – threatens to disrupt Israeli economic activities in the Mediterranean Sea with coordinated drone bomb attacks and to attack the United States in Iraq and beyond.

“All the gas fields are under threat and not just Karish,” Hizballah leader Hassan Nasrallah said in a July 26 interview with Lebanon’s Al-Mayadeen television. “There is no Israeli target, at sea or on land, that Hizballah’s precision missiles cannot reach. If Israel produces gas from the Karish rig in September and Lebanon does not get what it deserves, we are going to have problems.”

On Tuesday, Nasrallah repeated his threats. “Any hand that might extend to Lebanon’s natural resources will be chopped off, the same as any hand that tried to extend to its land was chopped off,” he said in a speech before tens of thousands of people marking the holy Day of Ashura. He declared that “Lebanon and its people can no longer tolerate the looting of its wealth. We have reached the end of the line, and we will go to the end of the road. Let no one try us, test us or bet on scaring us.”

The Karish gas field is located in a boundary maritime area that has been partially claimed by Lebanon. Although Lebanon has never filed an official claim to the area with the United Nations, it has attempted to extend its Exclusive Economic Zone. Under American pressure, the two sides have initiated negotiations that have not yet produced tangible results.

Contrary to claims by both the Lebanese government and Hizballah, the Karish field lies clearly inside Israeli maritime territory, 10 kilometers south of Lebanon’s self-defined maritime border, according to a Haaretz investigation. The field, with estimated reserves of 98.9 billion cubic meters (approximately 267 million barrels of oil), is an essential part of Israel’s attempt to establish itself as a reliable energy provider for the European Union and other regional actors, such as Egypt.

After the war in Ukraine laid bare their energy dependency on Russian fossil fuels, EU officials have been trying to establish effective cooperation with outside energy providers in the Mediterranean, including Israel. In June, Israel, Egypt and the EU signed a landmark deal providing for Israeli natural gas to be exported through Egyptian ports to energy-hungry European markets.

In early July, Israel shot down three unarmed Hizballah drones that were sent to the Karish gas field. Hizballah said it was a warning to Israel to deter any further economic activity in the region before an agreement with Lebanon has been reached.

Israel sent its own message, Defense Minister Benny Gantz said right after the incident: “The State of Israel is prepared to defend its infrastructure against any and all threats.” Energy Minister Karine Elharrar reinforced Israel’s resolve by visiting the Karish gas field a few days later.

But the next Hizballah drone to approach the site could well be armed. An Iranian military drone attacked an Israeli-linked oil tanker in the Persian Gulf last year in an incident that left two European crew members dead.

The Karish gas field is expected to become fully operational and start producing its first gas exports next month. Hizballah’s threats to attack the Israeli installations need to be taken seriously.

And Hizballah’s threats about Karish production extend far beyond Israel. “The ships that extract the gas are Israeli, even if under a Greek banner,” Nasrallah said in his interview. Greek-owned ships are expected to carry the gas to EU markets.

Nasrallah demanded that the Greek firm withdraw its ships from the sea area, warning that it would be “fully responsible” for any human or material loss that could occur in the event of an attack.

An additional front in Iraq

Iran also is causing considerable tension against the United States and its allies in Iraq, a country with a fragmented political and ethnic/religious landscape. The Iranian proxy militant Shia group Ashab al Kahf (“Companions of the Cave”‘) last week accused NATO, the United States and the United Kingdom of interfering in Iraqi politics and provoking political unrest.

Tensions are mounting in the Iraqi political scene between the Shia Coordination Framework – an umbrella coalition of Iranian-backed parties – and Iraqi nationalist Shia cleric Moqtada al Sadr over the formation of the government. Sadr’s supporters twice stormed Baghdad’s fortified international and government district, the Green Zone, last month and occupied the Parliament until the Iranian-backed parties granted by their demands. The response by Iran and its political proxies has been uncoordinated so far, revealing internal divisions on best political tactics.

But Ashab al Kahf blamed the West and vowed that “[a]ll of their embassies and bases will be targeted.”

The militant group has claimed responsibility for multiple attacks using rockets and improvised explosive devices since 2020, an attack on the U.S. Embassy in Baghdad, killing a child in a nearby area, and the bombing of U.S. support convoys in southern Iraq. The security situation in Iraq remains volatile and the void caused by reduced U.S. military presence creates opportunities for Iran to further spread its influence among the local population, both Shia and Sunni. The Iranian-guided military threat against American troops in Iraq and the greater region is likely to increase, top U.S. military officials say, as Iran will attempt to preserve its influence in the region by presenting an outside enemy.

The threats by Iranian proxies in both Iraq and Lebanon seem to be coordinated with Iranian authorities in a spiral of renewed hostile rhetoric against Israel, the U.S. and their allies. On Monday, Esmail Ghaani, commander of the extraterritorial Quds Force and successor to the notorious Qasem Soleimani, made new threats for attacks against both Israel and the United States.

“The enemies of [Iran’s] Islamic government, led by America and the Zionist regime should know that we will never stop self-sacrifice and will move forward on the path of resistance,” he said.

Iran continues to escalate tension with the United States, Israel, and their allies on multiple fronts. It threatens to destroy Israeli gas installations in the Mediterranean and to attack U.S. and other Western allies in Iraq.