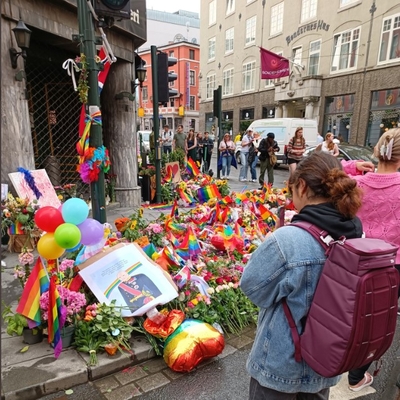 The man who opened fire in an Oslo gay bar on Pride Night last month has deep ties to an extremist leader dubbed “the most dangerous person in Norway.”

Two people were killed and at least 21 others wounded in the June 25 attack. A gunman opened fire at three places: the gay bar London Pub; the bar Per på hjørnet; and a takeout restaurant. Among the wounded, 10 were treated for serious, but not life-threatening injuries.

Norway’s Police Security Service (PST) determined “that this was an attack motivated by extreme Islamism.” A separate Pride Parade and related events were canceled as a result of the attack.
The suspect, Zaniar Matapour, is a 42-year-old Norwegian Muslim of Iranian descent. He allegedly is a radicalized Islamist with a history of mental illness, known to Norwegian intelligence services since 2015. According to an official statement from the Norwegian Police Security Service, Matapour recently was a “member of an extremist Islamist network in Norway, with a long history of violence and threats.”

He was in close contact with Arfan Bhatti, a central figure in Norway’s extremist Islamist milieu.

Bhatti, a 45-year-old Norwegian of Pakistani origin, has been a leading member in the Salafi-jihadist Norwegian group Profetens Ummah (The Prophet’s Ummah), which was originally inspired by Al-Qaeda and later pledged its support for the Islamic State.

He “is a supporter of transforming Norway into an Islamist state ruled by Sharia-laws,” a 2015 report from Israel’s International Institute for Counter-Terrorism said.

Bhatti was convicted in 2008 for conspiring to attack an Oslo synagogue with automatic weapons in 2006. Police say it was Bhatti who opened fire, but no one was injured. He was in police custody from 2006-2009. It did not curb his extremism, however, as he traveled to Pakistan in 2010 to wage jihad.

“We want Norway to become an Islamic nation one day and be governed by Sharia law,” he said in a 2012 interview with the Norwegian daily Dagbladet.

When asked whether he was willing to perform or encourage terrorist acts in support of his cause, Bhatti evaded the question by saying that the definition of terrorism depends on the observer. In 2013 Bhatti again went to Pakistan.

During his time in Pakistan, Bhatti was jailed for his contacts with Taliban jihadists. He returned to Norway in 2015.

On June 14, ahead of the planned Gay Pride celebration in Oslo, Bhatti posted a burning rainbow flag and a quote on social media calling for the killing of gay people. “One should kill everyone who acts as Lot’s people,” he wrote, quoting an Islamic hadith. 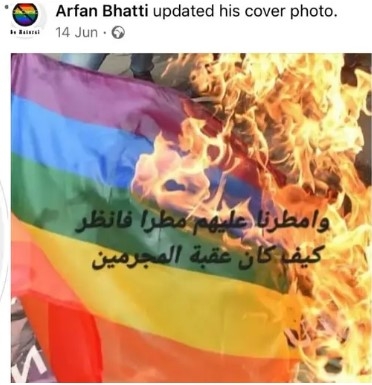 The attacker struck 11 days later, on Gay Pride Night. Witnesses say a man walked into the London Pub carrying a bag which had two guns in it. “I saw a man arrive with a bag, he picked up a gun and started to shoot,” said journalist Olav Roenneberg, in the area during the attack. A woman told Norwegian media that the attacker took his time to aim carefully at his targets. According to another witness, the shooter shouted Allahu Akbar as he opened fire.

At least 12 shots were fired, while up to 100 people hid terrified in the club’s basement. Finally, the attacker was arrested by police officers who rushed to the crime scene. The police retrieved two weapons at the crime scene by police, one a fully automatic gun.

Matapour had a previous conviction for knife and drug possession. He has refused so far to explain his actions to the police, and is in custody for suspicion of murder, attempted murder and terrorism.

Police met with Matapour in May after they say he showed interest in “demonstrations and manifestations perceived as insults to Islam,” such as the gay pride events. Still, the estimate of the Norwegian authorities at the time was that he “did not have violent intentions not intend to commit violence.” This conclusion was reached despite his relationship with Bhatti, and even though he was vocally condemning what he perceived as “violations of Islam” in Norwegian society.

According to the official National Threat Assessment for 2022, Norway faced an even chance of Islamist terrorist attacks as “the threat of terror will either come from individuals who are inspired by the ideology and message of the terrorist organizations ISIL and al-Qaeda, or from individuals mobilized by factors perceived as provocations, desecrations or oppression of the Islamic religion and of Muslims.”

This is not an isolated incident, especially in Scandinavian countries. A Danish man carrying a bow and arrow killed five people and wounded three others last October in Kongsberg, Norway. The attacker was Danish convert to Islam 37-year-old Espen Andersen Braathen. Like Matapour, Braathen also was questioned by Norwegian police due to concerns for his radicalization. Again, the Norwegian authorities determined he was not a threat.

Sweden has seen similar acts of violence, often with an Islamist undertone or connection, which have unfolded in Sweden. The most recent came in April after an anti-Muslim group publicly burned a Quran, leaving 104 police officers injured and leading to the arrest of 40 people.

The crime gangs active in Sweden’s urban centers are based largely on immigrant populations, according to police data analyzed by Amir Rostami, a leading criminologist and senior lecturer in criminology at the University of Gävle. Islamist narratives of an inherently hostile Western society against Islamic values among immigrant Muslim population also are abundant in Sweden with the circulation of malicious rumors, such as the kidnapping of Muslim children.

Scandinavian states with their often naive perception of the dangers posed by Islamist terrorism and radicalized lone actors are gradually becoming a safe haven for Islamist activities.

Re-Posted with permission of IPT.