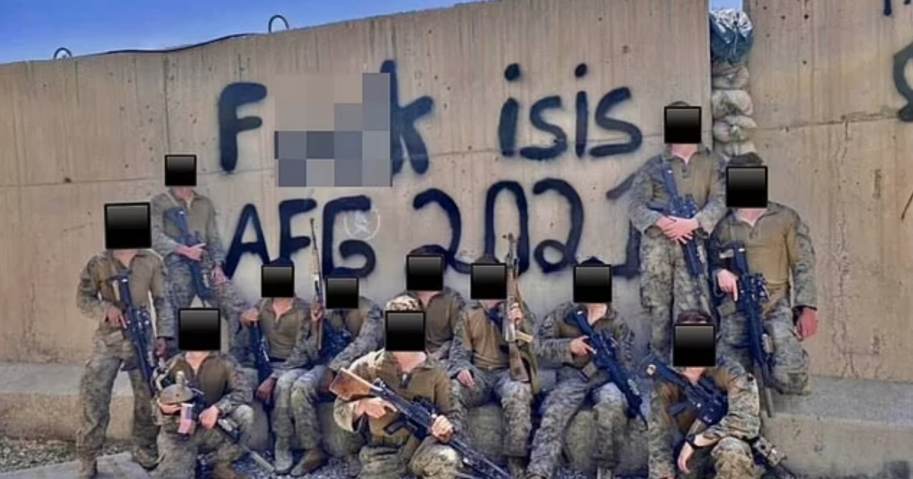 This week, a US Marine publicly exposed another despicable decision that was made by the Biden Administration during the Botched Afghanistan withdrawal.

He revealed that – in the days following the horrific suicide bombing that killed 13 troops – he and his fellow highly trained Marines were degradingly forced to clean up EVERY LAST PIECE of trash and wipe away all insulting messages that they had left for the Taliban and ISIS on the walls of Kabul airport.

The unnamed marine spoke with the Washington Post, explaining that the order to remove the graffiti and tidy up the airport came from his ‘bosses,’ who wanted to ensure a clean airport for the new savage terrorist owners when they took over.

What’s even more ridiculous is the soldiers had been previously ordered to scatter trash around the airport to frustrate the eventual Taliban takeover.

“My boys had to go… pick up every last piece of trash… For who? The Taliban?

The Marine also shared some examples of the graffiti messages that they were forced to take down. They all had the same simple message: F#CK THE TALIBAN / ISIS.

Well deserved, if you ask me.

One of the photos shows 12 of our troops holding their guns and proudly standing in front of a wall that has the words “F#ck ISIS, AFG 2021.”

Lastly, a trio of soldiers shows off a letter they were going to leave on the ground for some unsuspecting terrorist dirtbag to pick up.

Yes, you guessed it. It says “F#ck The Taliban