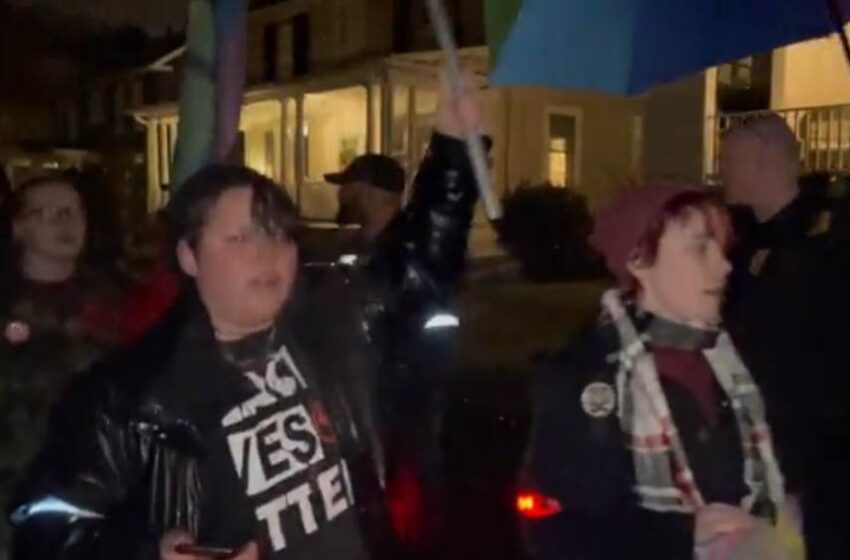 Nothing is spontaneous with these people. It’s always a planned and organized operation.

Person on left was one of the chant leaders calling out “Cut his time short!” as the marchers were in front of Justice Kavanaugh’s home. Screen image.

The protesters chanted in call and response as they marched past a line of police in front of Kavanaugh’s Chevy Chase, Maryland home, “Cut his time short! A rapist should not rule the court!” and “No privacy for us! No peace for you!”

Video of the protest was posted to Twitter by the Daily Signal’s Mary Margaret Olohan.

Kavanaugh’s home has been the target of protests since a draft leak in May of last year of the Dobbs abortion decision overturning Roe and Casey that returned the matter of abortion to the states. The final decision was was released in June.

These protests just happened to take place the same weekend that a new anti-Kavanaugh film was released by Doug Lyman at Sundance on Friday night.

Deadline reported on the film’s premier.

Director Doug Liman says his self-funded Brett Kavanaugh documentary Justice, which premiered at Sundance Friday night, might be far from finished as new tips started pouring within a half hour of the highly-secretive project being announced on Thursday.

“I thought the film was done… I thought I was off the hook. I’m in Sundance, I thought, I can sell the movie,” Liman said ruefully at a Q&A following the world premiere of his first documentary, which re-examines sexual assault accusations against Supreme Court Justice Brett Kavanaugh raised during his confirmation hearings in 2018. The film follows up tips the FBI apparently ignored in an investigation launched after Dr. Christine Blasey Ford accused Kavanaugh of assaulting her during a party in 1982 when they were both high school students in Maryland.

Justice gives extensive attention to allegations from another woman, Deborah Ramirez, who also