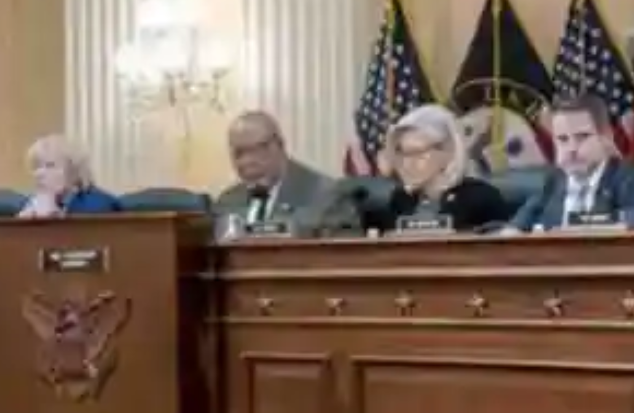 The establishment unites to destroy America and the opposing political party

Rep. Bennie Thompson announced today that the Jan. 6 Soviet committee would make criminal referrals to the Department of so-called Justice. One of the crimes they came up with just for Trump allies is a ‘conspiracy to defraud the United States.’ They are inventing crimes.

They will try to imprison Trump supporters. That’s the next step in turning a nation into an authoritarian nation. First, they silence people, then they fine them or sue them to bankrupt them, and when that doesn’t work, it quickly moves to imprisonment. You know what comes next.

We don’t know who is facing a criminal referral yet, but we can see Kash Patel at the top of the list because he has courageously exposed the J6 panel’s lies. Lawyers like John Eastman and Jeffrey Clark could be on the hit list, perhaps even Jenna Ellis.

Thompson – not a very bright light – believes many witnesses perjured themselves; he said, “that’s part of the discussion.”

If you don’t agree with them, you must be lying.

They will meet later today, and we will know more then.

A subcommittee of members was tasked with providing options to the full committee about how to present evidence of possible obstruction, possible perjury, and possible witness tampering, as well as potential criminal referrals to the Department of Justice, according to multiple sources familiar with the committee’s work.

They are inventing crimes. Perhaps they can find something from the Civil War as they did with the J6 prisoners or perhaps the Revolutionary War? One new crime they’re considering is a conspiracy to defraud the United States and obstruction of an official proceeding of Congress. They do plan to imprison Trump staff or other allies.

What they left out is Raskin comes from a family of communists, Schiff is criminally dishonest, Lofgren is oblivious and far-left, and Cheney is out for revenge while absent a moral core. That’s only my opinion, by the way.

“The decision of whether to issue criminal referrals has loomed large over the committee. Members on the panel have been in wide agreement that former President Donald Trump and some of his closest allies have committed a crime when he pushed a conspiracy to prevent the peaceful transfer of power, as they’ve laid out in their hearings. But they have long been split over what to do about it, including whether to make a criminal referral of Trump to the Justice Department,” CNN writes.

Their opinion is that the election fraud was a conspiracy. As for Trump and his allies committing a crime. They interpreted the Constitution and they acted accordingly.

CNN is pretending the decision “hung like a shadow” when we all know they planned to do this and are happy to do it.

This is an entirely politically-motivated panel. They never allowed the victims to bring in lawyers or witnesses or have due process. It was totally one-sided. The people on the panel are all anti-Trump, anti-America – every single one. They have no right to do this or to run a one-sided fishing expedition with new invented crimes no one knew about or could have willfully violated, like ‘conspiracy to defraud the United States.’

The establishment unites to destroy America and the opposing political party. Think about it. They are flooding the country with future Democrats, so they have a one-party system, and the people will have little say. That is the real story.

Scoop on Why Trump Canceled the J6 PresserJanuary 5, 2022In “Home of News, Politics & Opinion”

No Evidence of Any Crime in the J6 Electoral CountAugust 1, 2022In “Home of News, Politics & Opinion”