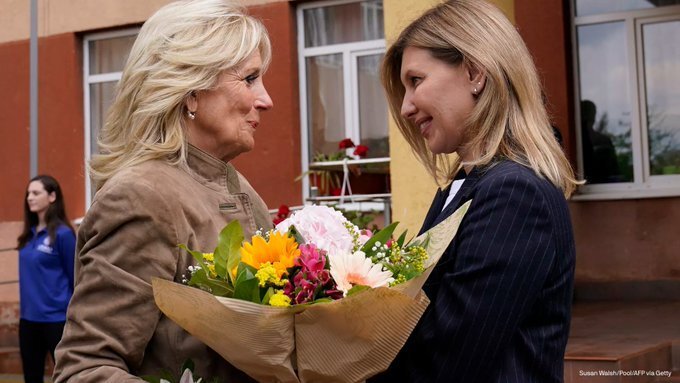 Ukraine got a big show of support from Western allies on Sunday with separate visits by Jill Biden, Canadian Prime Minister Justin Trudeau and pop group U2 singer Bono and guitarist The Edge. The U.S. also sent Charges d’Affaires Kristina Kvien to Kyiv for a brief stay at the shuttered embassy in Kyiv to join in VE Day celebrations. Meanwhile Joe Biden stayed at the Biden’s Delaware home where he participated in a virtual G7 – Zelenskyy meeting Sunday morning before heading out for a round of golf. First lady Jill Biden (L) receives flowers from Ukrainian first lady Olena Zelenska on May 8 outside of a public school that has taken in displaced students in Uzhhorod. Photo: Susan Walsh/Pool/AFP via Getty Images

Jill Biden’s visit capped off a Mothers Day themed trip to Romania and Slovakia where she visited Ukrainian refugees. Biden made an unannounced trip across the border Sunday to the town of Uzhhorod where she met Ukrainian First Lady Olena Zelenska. It was reportedly the first time Zelenska had been seen in public since Russia’s war on Ukraine began on February 24.

Pool: “This is the first time #Zelenska has appeared in public since Feb. 24, the date of the Russian invasion, per U.S. official.”#Russia #Putin #Zelensky pic.twitter.com/NEPanIqaaY

“We understand what it takes for the U.S. First Lady to come here during a war, where the military actions are taking place every day, where the air sirens are happening every day, even today,” Olena Zelenska told @Flotus in Ukraine. https://t.co/vz3K0sSYeW pic.twitter.com/EinrenPJCG

Today, I spoke with G7 Leaders and President Zelenskyy about our ironclad unity and commitment to keep strengthening Ukraine and ratcheting up the pain on Putin. pic.twitter.com/15FYYnfueS

Our Charge d’Affaires Kristina Kvien and a small group of diplomats traveled to Kyiv today to conduct diplomatic engagements as we continue to plan for the resumption of @USEmbassyKyiv operations. Wonderful to see their arrival in Kyiv. #UnitedWithUkraine https://t.co/jsWMhLOFUH

Trudeau was in Kyiv to reopen the Canadian Embassy and to meet with President Volodymyr Zelenskyy. Trudeau also visited the Kyiv suburb of Irpin.

Bono and The Edge played a concert in a Kyiv subway station that serves as a bomb shelter. They also visited the liberated towns of Borodyanka, Irpin and Bucha where a Russian massacre of civilians took place while under occupation.

U2 frontman Bono and his bandmate The Edge performed a 40-minute concert in a metro station in Kyiv and praised Ukrainians fighting for their freedom from Russia https://t.co/TxN28WvMxF pic.twitter.com/5cw71Zp2VD

Bono and U2 are performing at Khreshchatyk subway station in #Kyiv

Bono (U2) in Kyiv metro today

U2 frontman Bono visited the grounds of a church in Bucha, Ukraine, where a mass grave was found in March after Russian troops withdrew from the town. Earlier Sunday, Bono and his bandmate the Edge performed in a Kyiv metro station. https://t.co/w4yDSxQbhn pic.twitter.com/jvw0e4t1qf

The visits came as news broke of a Ukrainian school in Luhansk being bombed by Russia with fears of dozens killed.