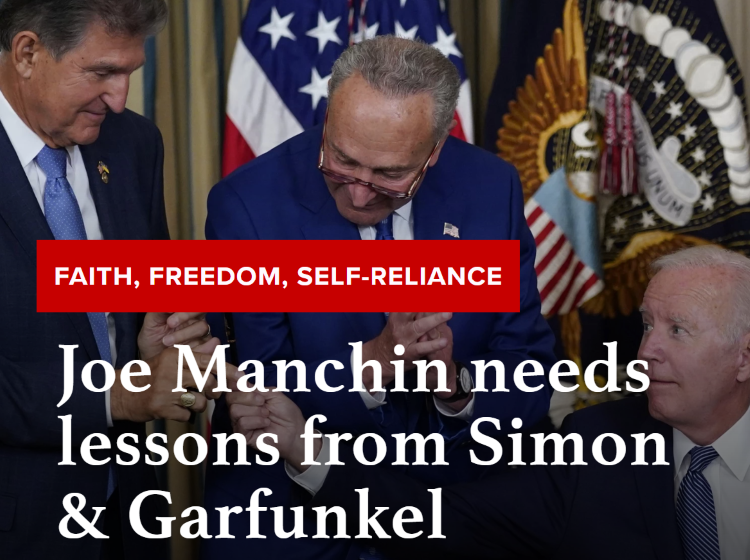 Sen. Joe Manchin (D-WV) is being roundly pilloried for getting nothing in return for enabling his party leaders to enact a budget-busting, IRS-unleashing monster of a leftist budget law. He deserves the scornful treatment.

After more than a year of insisting that adding massive government spending would be inflationary and that new taxes and regulations on fossil fuels would be grossly counterproductive, he made a deal with Senate Majority Leader Chuck Schumer (D-NY) to push through a bill with massive spending and new burdens on fossil fuels. In return, all he received was a vague pledge for energy-developing “permitting reform” that, in theory, Republicans also supported. Emphasis on “vague.”

The first rule of common sense that Manchin violated is that one should not give up something big now for a mere promise of future action. The second rule is that if you break the first rule, get the promise in writing, and make it specific. The third rule is to make sure that the people on your perceived side of the promissory note (in this case, Republicans supporting permitting reform) actually like the specific details of the reforms you propose. The fourth rule is that the cause you are trying to help must actually be more helped than harmed by those specifics.

And the fifth rule is never to trust Schumer.

Manchin violated every single rule. He (1) allowed big spending and taxes merely for a promise. The promise was (2) not specific and not in writing but vague. The eventual details, even on the alleged win for his side, as they emerged, were (3) hardly satisfactory to Republicans, because, as the Wall Street Journal explained at length, they would in many ways (4) worsen the situation for the fossil fuel industry everywhere but West Virginia.

And Manchin already had plenty of reason to distrust Schumer , including Schumer pretending for months in 2021 that he didn’t know Manchin’s top-line spending number even though he had signed a document acknowledging it. When you aren’t on his general side of things, Schumer’s word is fool’s gold.

Yet, suddenly, late this summer, Manchin succumbed to Schumer’s vague promises. And in the end, Schumer couldn’t deliver nearly enough Democratic votes for Manchin’s permitting reforms, and Republicans were so appalled by the larger betrayal and by the actual, counterproductive permitting details that they wouldn’t bail Manchin out. Now, the permitting reform is comatose. Manchin achieved nothing, other than enabling $80 billion more for the IRS to hire 87,000 more workers , with 14 times as much of the IRS largesse going to enforcement than to helping customers navigate the IRS’s infamously bad “help” desk.

Manchin must not be much of a folk rock fan. What happened to him was what happened to the character in the song “ Boxer” by Simon & Garfunkel : “I have squandered my resistance / for a pocketful of mumbles. / Such are promises: / All lies and jest. / Still a man hears what he wants to hear/ and disregards the rest.”

Manchin disregarded the rest, and he disregarded the rules of common sense. In doing so, the boxing “glove that laid him down” was, well, his own. Accomplishing nothing good for his efforts, Manchin effectively scored a knockout against himself.

Why Putin will soon have to choose between losing in Ukraine or using nuclear weapons
By: Tom Rogan
Social Security and the poverty line
By: Andrew Biggs
Why even permanent benefit expansions are never enough
By: Matt Weidinger

Sign up now to get the Washington Examiner’s breaking news and timely commentary delivered right to your inbox.
OPINIONBELTWAY CONFIDENTIALJOE MANCHINCHARLES SCHUMERFOSSIL FUELSOPINION
Share on: