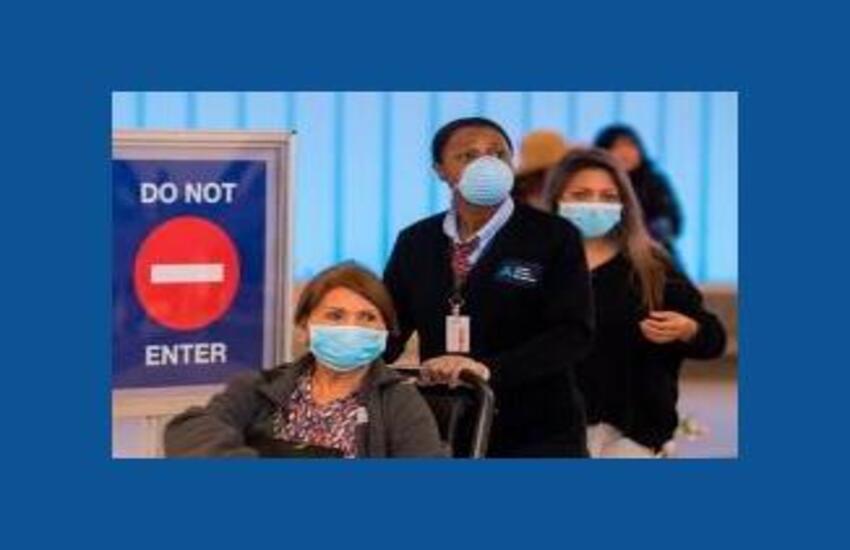 Passengers wear face masks to protect against the COVID-19 (Coronavirus) after arriving at the LAX airport in Los Angeles, California on March 5, 2020. (Photo by MARK RALSTON/AFP via Getty Images)

By Melanie Arter February 19, 2021
(CNSNews.com) – The U.S. is on a downward slope to have “very low levels” of COVID-19 infection” by April, and despite reports to the contrary, herd immunity has already kicked in, Dr. Marty Makary, a professor at Johns Hopkins University, said Friday.
“I think any scientist has to look at a 75 percent reduction in cases over the last six weeks and ask what’s happening, because it cannot be explained by the vaccines. It cannot be explained by a sudden change in behavior. Herd immunity is not binary,” Makary told Fox News’s “The Story with Martha McCallum.”

“It’s not an all-or-nothing thing, and as more people get infected and as there is more natural immunity out there, there are fewer people left who are susceptible. What we’re seeing is that herd immunity has already kicked in. It’s on a slope to be very low levels of infection by April. We add to that, vaccinated immunity. We’re about to see a very steep decline, and I think it’s important to plan accordingly,” he said.In a Wall Street Journal op-ed, Makary pointed out that COVID cases have dropped by 77 percent in the past six weeks, much faster than experts predicted.

Fox News host Martha McCallum pointed out that Makary thinks that the number of 28 million confirmed cases of COVID in the U.S. is too low and that one of the biggest mistakes is the vast underestimation of the number of Americans who had it.

“You’re right. People are looking at trackers and saying 28 million, and that’s the number of people with infection, but that’s only confirmed. We’ve only been confirming about one in four to one in 10 cases. If you live in a community where everyone has access and they get anxious, and they run out and get tested, you might think, well, most people are getting tested,” Makary said.

“Most Americans don’t live like that. Most people have had major barriers to testing and that 28 million cumulative total, it probably represents one in 6.5 actual infections out there,” he said.

“We know from the UK now and from European studies that even if you never had symptoms, you felt great the entire time but were close to someone or exposed or you live with somebody who had it, your T cells, which are very good immune cells, have been activated, and looking at antibodies does not capture activated T cells. There are more people with activated T cells than there are with antibodies,” Makary added.

When asked how many people in the U.S. are immune to COVID considering that there are 320 million people, Makary said, “I think at least 180 million just using the general extrapolation of the number of confirmed cases to the number of people who probably had it and didn’t have access to testing. Look, for example, at the mathematics. About one in 600 Americans have died from COVID.

“We know case fatality’s about one in 400. That means about two thirds of the country is represented right now in the current death tolls. We generally think that T cell activation is a powerful form of immunity,” the professor said.

“Europeans believe it a lot more than we do, and when we start to add in a lot of vaccinated immunity, which by this week will be 15 percent of Americans and by the end of April as much as 40-45 percent of Americans, that’s a powerful deterrent. Herd immunity is not binary. It may have already started to kick in,” he said.

MacCallum pointed out that Makary’s prediction is different from that of National Institute of Allergy and Infectious Diseases Director Dr. Anthony Fauci, who predicted that real herd immunity won’t come until July or August, and from President Joe Biden, who said things won’t get back to normal until at least Christmas.

“Are they concerned about this variant, are they wanting to keep the pressure on to get this very large financial bill passed? What is the disconnect?” she asked.

“I don’t know the motives. I’ve got to assume the best in people, but yes, I have these conversations all the time with the medical community and half say … that’s a good point, I believe those studies and the other half say that they are just dismissive of natural immunity because there’s no randomized controlled trial. You can’t randomize a country to not get the infection,” Makary said.

“The reality is the reinfection rates after prior infection are very low. They’re less than one percent and when they do happen, they’re mild cases. So natural immunity is powerful. It works. India may already be at  herd immunity levels. One town in Brazil I talked about in the piece has already reached herd immunity levels. That’s where we are,” he said.