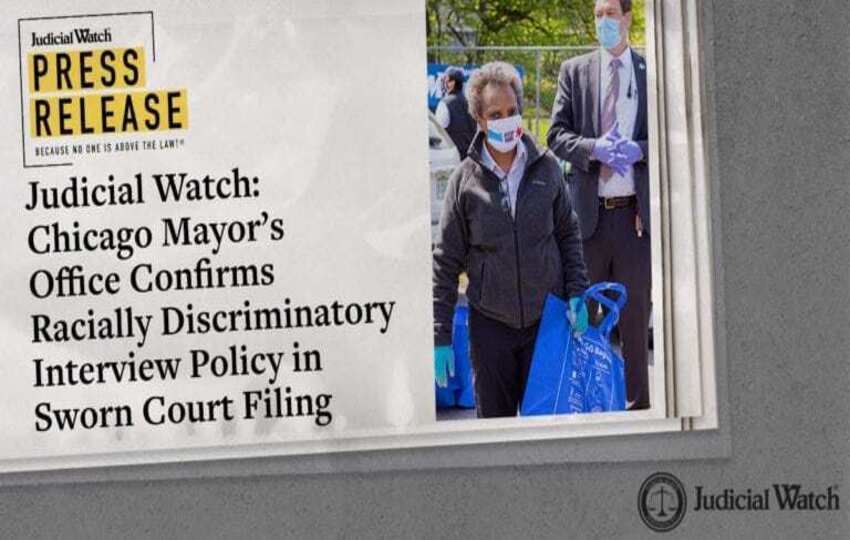 (Washington, DC) Judicial Watch announced today that a new federal court filing by Chicago Mayor Lori Lightfoot confirms that her office engaged in a two-day “press tour” involving six interviews that was “exclusively” limited to “journalists of color.” The admissions appear in a sworn declaration by Mayor Lightfoot’s communications director, who also declares the racially discriminatory policy is allegedly no longer in effect and there are “no plans” to reinstate the race-based exclusions of journalists.

The filing comes in response to a June 7 federal court order requiring that the Mayor clarify her policy. Pending before the court is a motion to preliminarily enjoin Mayor Lightfoot from denying on the basis of his race Daily Caller News Foundation reporter Thomas Catenacci’s interview request. Today’s filing is silent as to whether Catenacci was denied his interview request because of his race, which is white.

A civil rights lawsuit against Lightfoot was filed on May 27, 2021, in the United States District Court for the Northern District of Illinois, Eastern Division (Catenacci et al v. Lightfoot (No. 1:21-cv-02852)).

Judicial Watch filed the lawsuit after Catenacci, a white journalist, emailed Mayor Lightfoot’s office requesting a one-on-one interview with the mayor. The office never replied to the request or to two additional follow-up emails from Catenacci. Catenacci’s request came on one of the days that the mayor admittedly was discriminating based on race.

The lawsuit and subsequent preliminary injunction motion assert that Lightfoot’s refusal to be interviewed by Catenacci violates the Daily Caller News Foundation’s and his First Amendment rights and Catenacci’s right to equal protection.

“Mayor Lightfoot’s office today shockingly confirmed to a federal court that she discriminates on the basis of race in the conduct of her public office,” said Judicial Watch President Tom Fitton. “This racism is blatantly unconstitutional.”

Christine Svenson of Svenson Law Offices in Chicago, Illinois, is assisting Judicial Watch with the lawsuit.