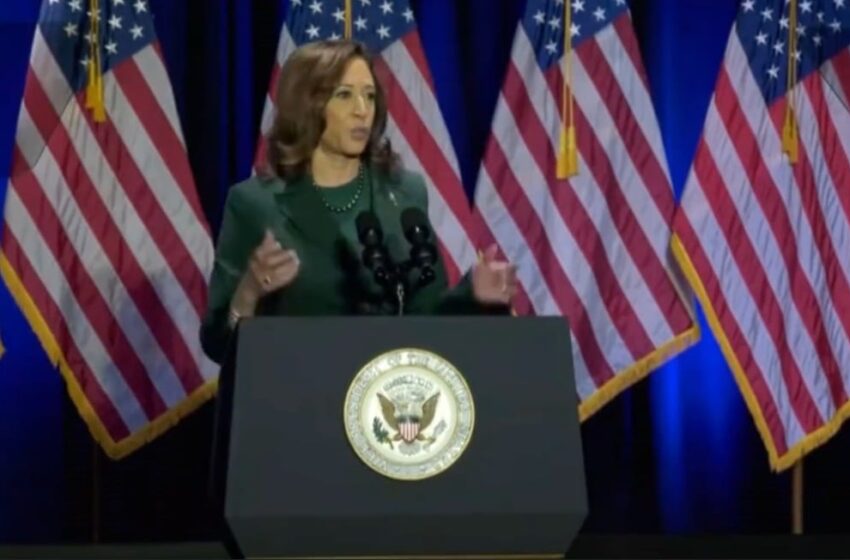 Kamala Harris on Sunday delivered remarks on abortion at The Moon in Tallahassee, Florida on the 50th anniversary of Roe v Wade.

Harris took jabs at Florida Governor Ron DeSantis over the state’s ban on abortions after 15 weeks of pregnancy.

“Can we truly be free if so-called leaders claim to be on the, and I quote, ‘the vanguard of freedom’ while they dare to restrict the rights of American people and attack the very foundations of freedom?” Harris said.

Harris omitted the right to “life” when quoting the Declaration of Independence in her pro-abortion speech.

She also left out “Creator” when describing where our right come from.

“A promise we made in the Declaration of Independence – that we are each endowed with the right to liberty and the pursuit of happiness,” Harris said.

Here is the actual text from the Declaration of Independence: We hold these truths to be self-evident, that all men are created equal, that they are endowed by their Creator with certain unalienable Rights, that among these are Life, Liberty and the pursuit of Happiness.

Kamala Harris is a disgrace.

BREAKING: Kamala Harris omits the right to “Life” when quoting the Declaration of Independence in pro-Abortion Speech, says all Americans are “endowed with the right to liberty and the pursuit of happiness” pic.twitter.com/O8V39cbtbk

Dummy Joe Biden botched the Declaration of Independence a few years ago on the campaign trail shortly before they locked him in his basement because of the ‘pandemic.’

“We hold these truths to be self evident. All men and women created by the, go, you know, the thing…” Biden said to a cheering crowd.

Then, in the same rally, he stumbled through The Preamble of the Declaration and forgot the word ‘equal’.

“We hold these truths to be self evident. All men and women created by the, you know, the thing…”