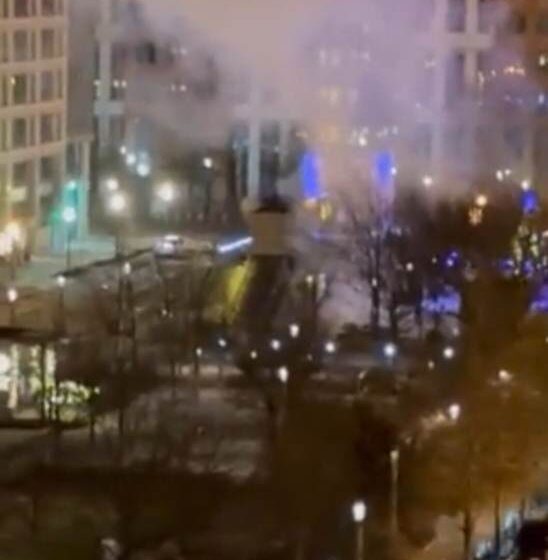 A loud explosion in the Navy Yard neighborhood in Southeast Washington, D.C. Sunday night that rattled windows, set off car alarms and was heard and felt nearly two miles away was reportedly blamed by responding firemen on a large illegal firework device.

Photos taken at the scene show a modest sized crater at the Canal Park ice skating rink with a nearby glass barrier blown out. No injuries were reported, but nerves were shaken throughout much of the area.

Smoke from the explosion in Navy Yard. Praying everyone is ok! https://t.co/QfMngApaGtpic.twitter.com/VhysWtq3n9

Scene of explosion in Navy Yard DC. Happened in Wiseguys Pizza building on 2nd and M. Boom shook my apartment a few blocks away and set off lots of alarms. Hope everyone in the area is ok. @PoPvillepic.twitter.com/g1UuKZItrm

Photos from the scene show damage seemingly incongruous with the loudness of the explosion.

That loud explosion heard and felt for many blocks in and beyond the Navy Yard neighborhood was something that left a hole in the ice and broken glass at the Canal Park ice rink. Police just taped off the area. pic.twitter.com/ixHTa988I7

A big firecracker according to firemen:

The culprit is what firefighters on the scene concluded was, in their professional opinion, “a big fuckin firecracker.” pic.twitter.com/D3XCWpsf1d

The explosion in Navy Yard was a bomb someone threw onto the ice at Canal Park. Shattered a pane of glass and left a big hole in the ice. No one was hurt.