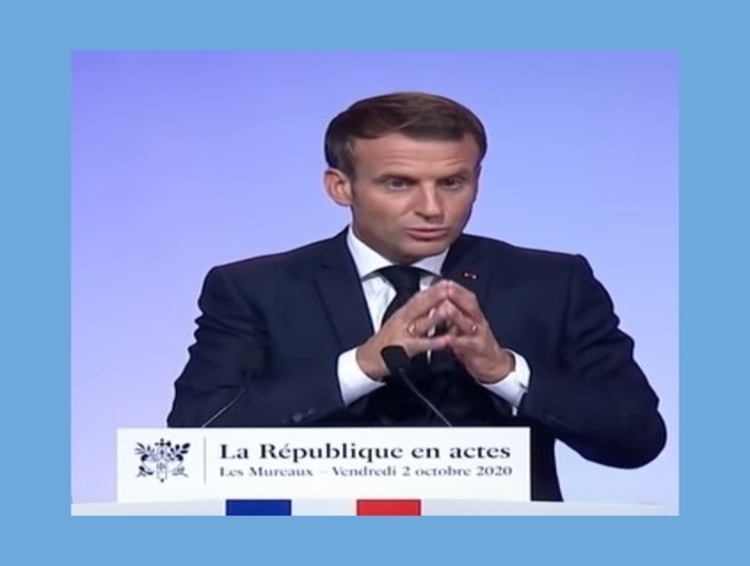 It started with a beheading.

Last October, 18-year-old Chechen refugee Abdullakh Anzorov used a cleaver to murder history teacher Samuel Paty on the streets of a Paris suburb. Paty’s offense: in a classroom discussion about free speech, he had shown his students a cartoon of Islam’s prophet Mohammed. Fast-acting police shot and killed Paty’s assassin soon after the attack.

In the aftermath, as French President Emmanuel Macron spoke out forcefully to defend the nation’s guiding principles of secularity and free speech, other Western nations expressed their horror at the killing and a steadfast support of France.

But just three months later, everything began to change.

As France began debating new laws to combat Islamism, or the conservative, political brand of Islam, allies started to pull away, fearful that Macron’s measures were too harsh, that they promoted Islam-hate in the name of the Enlightenment.

Now Macron is facing even more criticism for his latest proposal: a campaign against what he and others call “Islamo-gauchisme,”or “Islamo-leftism,” which, they warn, is bringing a dangerous perspective and a form of “cancel culture” lifted in part from American university campuses, to France. The debate reached new heights in February when French minister for higher education, Frédérique Vidal, called for an investigation into the impact of what she called “militant” Islamo-leftist activism in French academic circles.

The backlash against the campaign has been fast and furious, fueling antagonistic responses both at home and abroad. French daily Le Monde called the term “Islamo-gauchisme,” “hazardous.” France’s Conference of University Presidents called the concept a “‘pseudo-notion’ popularized by the far right,” according to the New York Times, which describes “Islamo-leftism” as a term “used by conservative and far right figures … against those they accuse of being soft on Islamism and focusing instead on Islamophobia.” And a sociologist at the country’s National Center for Scientific Research, which Vidal has asked to conduct the investigation, told the Times that the term “Islamo-leftism” was aimed at “delegitimizing” debates on race in order to silence them.

But the thing is, Macron is right.

And it’s not just the “far right” who think so: this liberal Democrat does, too, and so do countless others, concerned about the confluence of far left “victim culture” and the victimhood tendencies of radical Islamists, many of whom weaponize the notion of Muslims as victims to radicalize and recruit Muslim youth.

Indeed, as early as 2015, British-Pakistani counter-terrorism expert Maajid Nawaz observed in the Daily Beast: “British Muslims are being spoon-fed regressive left sedatives, encouraging a perpetual state of victimhood in order to score their petty ideological points against ‘the West.’ In the name of cultural diversity, aspiration is being stifled, expectations have been tempered, and because Muslims have their own culture, don’t you know, self-segregation and ghettoization have thrived …”

Although Nawaz was speaking of Muslims in general, Macron’s efforts focus on the means by which Islamists exploit that victimhood, and the ways that the far left, however unwittingly, plays into their hands. The alliance between the two groups plays out – as Macron cautions – in the protests, sometimes violent, against pro-Israel speakers on university campuses across the United States in the anti-Semitic Boycott, Divest, and Sanction (BDS) movement popular among the far left, and particularly leftist student groups; and in the anti-Israel alliances of the so-called “Squad” in the U.S. Congress, led by far-left activist Congresswoman Alexandria Ocasio-Cortez, D-NY, and Somali-born Ilhan Omar, D-Minn. It is found, too, in the frequent defense by members of the far left of misogynistic elements of conservative Islam, like burqas and hijabs, with events like “Wear a Hijab Day” organized to support covered women – while failing to create a similar event SUPPORTING those women who risk their lives by refusing to wear one.

By contrast, the Canadian ex-Muslim Yasmine Mohammed has instituted “No Hijab Day,” an annual event on February 1, in their honor.

“There is a natural fear among Europe’s left that challenging Islamist extremism can only aid Europe’s far right,” Nawaz explains in his Daily Beast editorial. Yet the very opposite is proving true: not only does the hyperbolic sympathy of far-left activists contribute to the perpetration of any number of abuses in conservative Muslim families (think of the German judge who refused to grant a Muslim woman a divorce from her violently abusive husband because, the judge stated, she “came from a “Moroccan cultural environment in which it is not uncommon for a man to exert a right of corporal punishment over his wife”), it adds fuel to the ire of white supremacists. Leftist groups supportive of Islamist efforts against assimilation in Europe, for instance, have backed campaigns to end Christmas celebrations, remove pork from school lunches, and shut down art exhibitions and other cultural events. And it has been far left groups who have joined Islamist protesters in the case that started it all, challenging the principles of free speech. All of which gives white supremacists fodder for their campaigns, adding to their arguments that Muslims are destroying Western culture.

Other alliances between radical Muslims and radical leftists have helped incite the growing waves of anti-Semitism in Europe. In a 2018 poll of European Jews who had experienced anti-Semitism, for instance, 30 percent of victims reported that the perpetrator was “an extremist Muslim,” and 21 percent said it was someone from the far left. The far right and neo-Nazi groups, by contrast, were responsible for only 13 percent of anti-Semitic incidents reported.

Even so, as Islamist and far left anti-Israel groups denounce Israel in defense of Palestinian freedom and promote their anti-Jew conspiracy theories, they lend reinforcement to the ongoing global white supremacist and neo-Nazi war against the Jews.

In fairness, Macron’s position is not without faults. Some critics, for instance, have rightly questioned the term “Islamo-gauchisme” itself, noting that it fails to differentiate between Islam or Muslims in general and Islamism, which, according to the U.S. 9/11 Commission Report, “is defined as ‘an Islamic militant, anti-democratic movement, bearing a holistic vision of Islam whose final aim is the restoration of the caliphate.'”

But that argument, even if justified, misses the larger point: that radicalized leftist and Islamist groups, acting in synchrony, only mobilize white supremacists; and as one jousts against the other, inciting ever more heated battles in an endlessly intensifying war, it is democracy itself that suffers, that weakens, democracy itself that – if we aren’t careful – falls.

Abigail R. Esman is a freelance writer based in New York and the Netherlands. She is the author of Radical State: How Jihad Is Winning Over Democracy in the West( Praeger, 2010). Her new book, Rage: Narcissism, Patriarchy, and the Culture of Terrorism, was published by Potomac Books in October 2020. Follow her at @radicalstates.