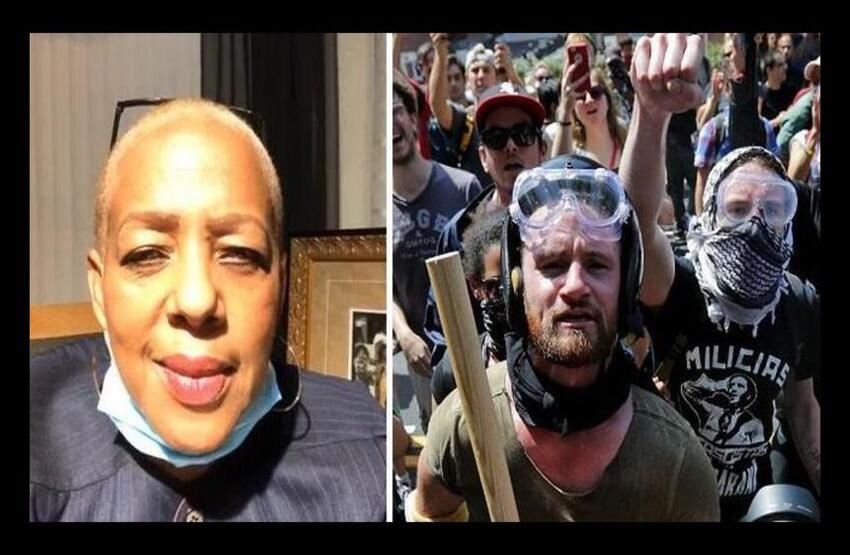 Racist ; Michigan Rep. Cynthia Johnson then added “And for those of you who are soldiers… you know how to do it. Do it right. Be in order. Make them pay.”

In a three-minute video posted to her Facebook page, the Democrat from Detroit said “This is just a warning to you Trumpers… be careful. Tread lightly. We ain’t playin’ with you…”

Johnson then added “And for those of you who are soldiers… you know how to do it. Do it right. Be in order. Make them pay.”

Johnson, perhaps realizing what a massively stupid thing she’d done, posted a follow-up video on Wednesday morning which appears to ‘clarify’ that she was talking about ‘soldiers for Christ, against racism and against mysoginy.’

She then went into victim mode, claiming she’s received personal threats after participating in a Dec. 2 Michigan House Oversight meeting featuring Rudy Giuliani – who brought a Dominion Voting System whistleblower that testified to fraud at the TCF Center in Detroit.

Well, lt looks like the Democrats ( who started the Civil War) are looking for a rematch…wow https://t.co/TBrY2BnX1m

Will Facebook suspend Johnson for her obvious call to violence?

Does this qualify as a threat to a specific group, hate speech, cyberbullying, oath breaking, sedition, conspiracy to commit up to & including murder by calling to action a specific, apparently trained militia? @RudyGiuliani @JennaEllisEsq @DHSgov

Probably the only Resolution she has brought fourth pic.twitter.com/82Z43DVQZV