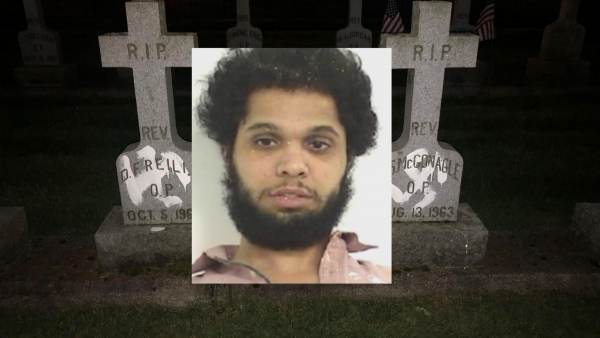 Police have arrested a man who spray painted swastikas on gravestones on the Providence College Campus before attacking a security guard.

Keveon Gomera, 26, has been charged with vandalism and assault with intent to commit a felony.

Update: Picture from yesterday after a man was arrested for spray-painting swastikas on gravestones @ABC6pic.twitter.com/v7oHDLwnMx

Gomera defaced the central cross and seven gravestones of Dominican friars who taught at Providence College before attempting to set a grassy area on fire.

“A man who believes he encountered Gomera before the assault told local NBC affiliate WJAR that Gomera was carrying a bucket of paint and accused Providence College of ‘being part of the slave plantations’ and said he was going to light an American flag on fire,” Catholic News Agency reported.

When a security officer attempted to question Gomera, he struck him in the head and ran away. The victim was treated at the hospital and released. The hunt for the violent vandal lead to the campus being placed on lock down until he was taken into custody.

“We loudly and unequivocally condemn this racist, anti-Semitic and anti-Catholic action, and the desecration of the gravestones of our beloved, deceased Dominicans who served Providence College so well and so faithfully for many years,” Providence College said in a statement. “In addition, we condemn this action in support and solidarity with the Jewish members of our community, many of whom enjoyed the friendship of those late Dominican friars.  PC has a long and proud history of collaboration with the Jewish community in Rhode Island.  Our Jewish-Catholic Theological Exchange is a significant part of campus life, and has promoted interreligious learning, understanding, and friendship between Christians and Jews for decades. Our community embraces love and mutual respect for all people; there is no place for hatred on our campus.”