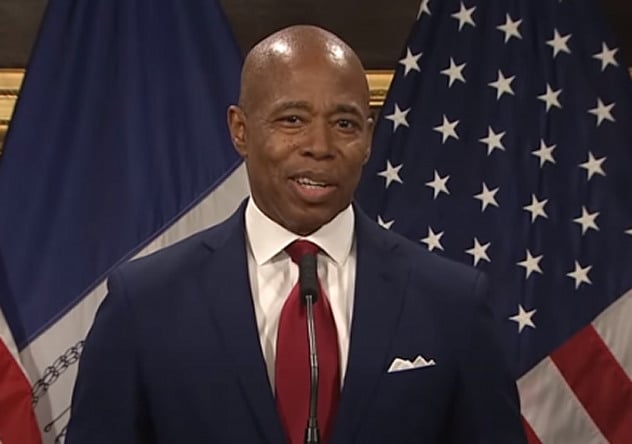 New York City Mayor Eric Adams is finally experiencing what people who live near the border have known for years.

Adams says New York is at a breaking point due to the number of migrants who keep arriving in the city and needing services.

Is Adams going to call out the Biden administration? They are responsible for this.

New York City Mayor Eric Adams said Friday that the Big Apple is at its “breaking point” as record numbers of migrants continue to arrive.

The leader submitted an emergency mutual aid request to New York State for immediate help this weekend to shelter the asylum seekers.

“We are at our breaking point. Based off our projections, we anticipate being unable to continue sheltering arriving asylum seekers on our own and have submitted an emergency mutual aid request to the State of New York beginning this weekend,” he said in a statement. “This type of request, reserved only for dire emergencies, asks the state for support to shelter arriving asylum seekers as the city faces an immediate need for additional capacity. Our initial request is for shelter to accommodate 500 asylum seekers, but, as New York City continues to see numbers balloon, this estimate will increase as well.”

The city reportedly received more than 3,100 asylum seekers in the past week, with 835 arriving last Thursday alone.

That marks the largest arrival in a single day since the influx began.

Eric Adams is now getting an education in reality.

Democrat mayors like Eric Adams in New York City are furious that illegal aliens are coming to their cities and using their resources.

But they do nothing to hold Joe Biden accountable for creating the border crisis.

What happens when the money runs out?

What is New York City going to do with all these people?