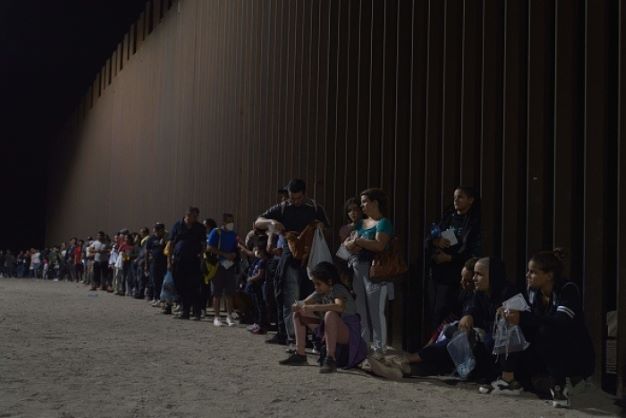 Migrants wait to be processed by US Border Patrol after illegally crossing the US-Mexico border in Yuma, Arizona. (Photo by ALLISON DINNER/AFP via Getty Images)

(CNSNews.com) – “Do you continue to maintain that the border is secure?” Rep.  Den Bishop (R-N.C.) asked Homeland Security Secretary Alejandro Mayorkas at a hearing of the House Homeland Security Committee on Tuesday.

“Yes, and we are working day in and day out to enhance its security,” Mayorkas responded.

Bishop (R-N.C.) cut him off and asked the same question of FBI Director Christopher Wray, who said he could only speak about border security from the FBI’s “narrow lane.”

“What I would say is that we see significant criminal threats coming from south of the border.  Whether it’s guns, drugs, money, violence, we see transnational criminal organizations that are sending their drugs here and that are using street gangs here to distribute it, and that contributes to the violent crime crisis here.

“We’ve had takedowns just in the last few months,” Wray said, giving the example of a drug seizure from a vehicle in Phoenix. Wray said the vehicle contained “enough fentanyl to kill the equivalent of the entire State of Pennsylvania.”

National Counterterrorism Center Director Christine Abizaid said her agency does not assess a significant threat from the uncontrolled southwest border:

“We don’t, actually,” she told Bishop. “Border security is really important,” she added. If we look at the nature of the threat and how it’s evolved here in the United States homeland, it’s been striking how the evolution to lone actors actually reflects how much more difficult it is for terrorists to enter into the United States.

“We look historically at the kind of attacks we’ve experienced here in the homeland. None of them have been connected to major illegal crossings or otherwise from the Southwest border.  That said, it remains a top intelligence priority,” she concluded.

The three testified just as Customs and Border Protection announced that its agents encountered 230,678 illegal aliens at southwest border in October, the first month of FY 2023. The chart below shows the Biden surge, which shows no sign of letting up.