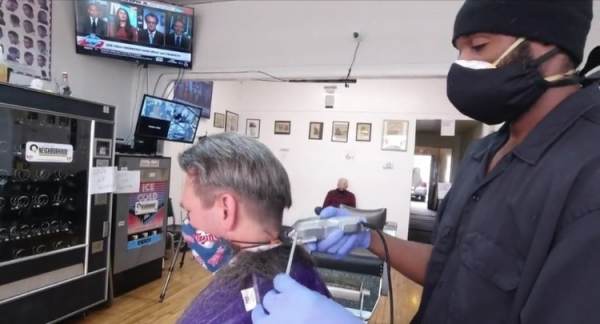 A Minnesota barber who tried to reopen his business during the Coronavirus lockdown is now facing up to $25,000 in fines.

However, the twice-extended shutdown left Dennie “starving” so he attempted to reopen his business.

“I’m not trying to be disrespectful in any way to his rules or laws, but it’s unfair” Dennie said, according to Twin Cities.

“I’m a business owner who is required by the state to go to school and learn (safety protocols),” Dennie said, “but someone who owns a liquor store, who is not trained, can have a group of people in there all day … and be called an essential business? It’s not fair. … I can’t see myself following an unjust law, which is not a law to me. And we starving. No, it’s not fair.”

“We’re just behind by a lot. And it just seems like if we don’t start back working, we’re going to lose what we, you know, put everything into,” he said. “It’s [the shutdown] killing us.”

After implementing extra safety protocols such as limiting the number of customers in his shop, the police moved in after he served just 16 customers and cited him for violating the stay-at-home order.

Dennie told Twin Cities that his customers felt comfortable getting haircuts, but the police decided to cite him anyway and now he’s facing up to $25,000 in fines.

Kings Barber Shop has also stepped up to help the community during the Coronavirus by handing out 2,000 rolls of toilet paper and 1,000 containers of soap.

Milan Dennie also runs a non-profit to give haircuts to underprivileged youth in the Twin Cities, Alpha News reported.

A GoFundMe to help Milan Dennie with legal bills and money needed to restart his business has raised over $9,000 in two days.