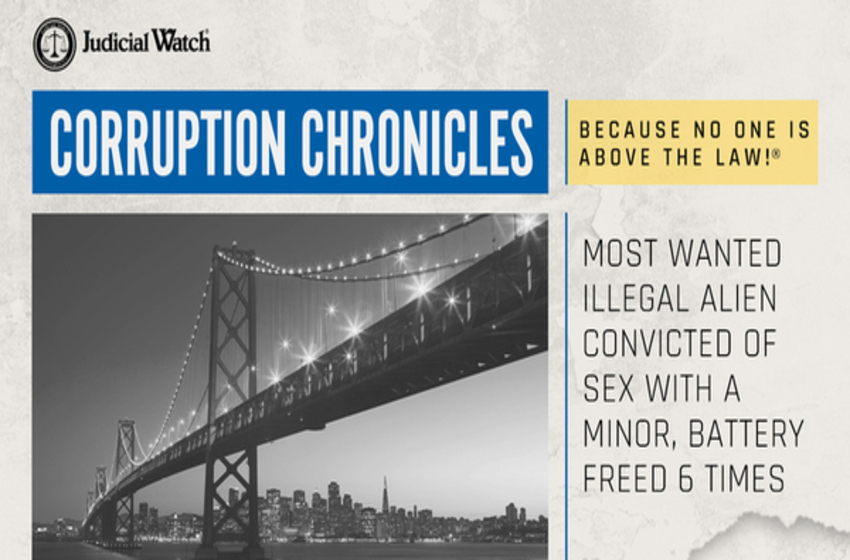 There is no shortage of examples nationwide that confirm illegal immigrant sanctuary policies endanger communities and this month we have a case that should serve as the poster child. Not surprisingly, it comes out of California but even for a notorious sanctuary state it seems excessive. An illegal alien with a lengthy criminal history that includes convictions for felony sex with a minor and battery was released by San Francisco authorities six times despite his violent history that also includes a domestic violence arrest.

The 25-year-old Honduran man, Kristian Jonas Gamez-Trejo, has long appeared on Immigration and Customs Enforcement’s (ICE) Most Wanted criminal alien list, but that didn’t stop San Francisco authorities from blowing off federal detainers and releasing him into the community. Thankfully, ICE recently arrested Gamez-Trejo in San Francisco during a fugitive operation. The agency’s San Francisco Field Office Director, David Jennings, rightfully blasted local authorities, saying in a statement that “there is no reason this convicted child predator should have been turned loose into our community. Even California’s misguided SB54 sanctuary policy allows local authorities to turn over to ICE any criminal aliens convicted of felony crimes of sexual exploitation or crimes endangering children.”

Gamez-Trejo has been running from the feds for years and, of course, settled in a place that offers illegal immigrants—even those who commit atrocious crimes—protection and public benefits. ICE says he illegally entered the U.S. around the beginning of 2014 and was arrested by the Border Patrol about a year later and removed to Honduras. He illegally reentered the U.S. sometime in 2015 and was arrested again by the Border Patrol and deported by the end of the year. Gamez reentered the U.S. illegally again and was arrested in 2016 on a warrant for felony sex with a minor. “At that time, ICE issued the San Francisco County Jail a request for voluntary transfer of Gamez,” the agency reveals. “The request was not honored and Gamez was released to the street. He was convicted of felony sex with a minor in November 2016 and sentenced to 87 days in jail with five years of probation.”

The saga continues. In 2017, Gamez-Trejo was arrested in San Francisco four times during an eight-month period and each time ICE detainers were ignored by local authorities. Instead, Gamez-Trejo was released back into the community to reoffend. In early 2019 the illegal immigrant was arrested again on domestic violence charges in Sonoma County, about 80 miles north of San Francisco. When California passed its statewide sanctuary law in 2017, officials in Sonoma County said it would have limited impact because they already had the policy in place, including a ban on cooperating with federal immigration authorities. ICE’s detainer on Gamez-Trejo was, of course, ignored by Sonoma County, but at least the felon was not released. Instead he was transferred south after San Francisco County issued a warrant for probation violation of the felony conviction for sex with a minor.

ICE kept close track and issued yet another detainer with San Francisco County in mid-May of 2019. Instead of turning the illegal immigrant offender over to the feds, San Francisco authorities released him and a few months later he was convicted of battery and sentenced to 180 days in jail. After completing the sentence early this year, Gamez-Trejo was again released from San Francisco County Jail back into the community for the sixth time. Jennings, the area’s ICE Field Office Director, says he is waiting for San Francisco officials to tell him how not turning Gamez-Trejo over made the community safer. Officials in sanctuary cities claim the policies make communities safer because illegal immigrants are not afraid to cooperate with police.