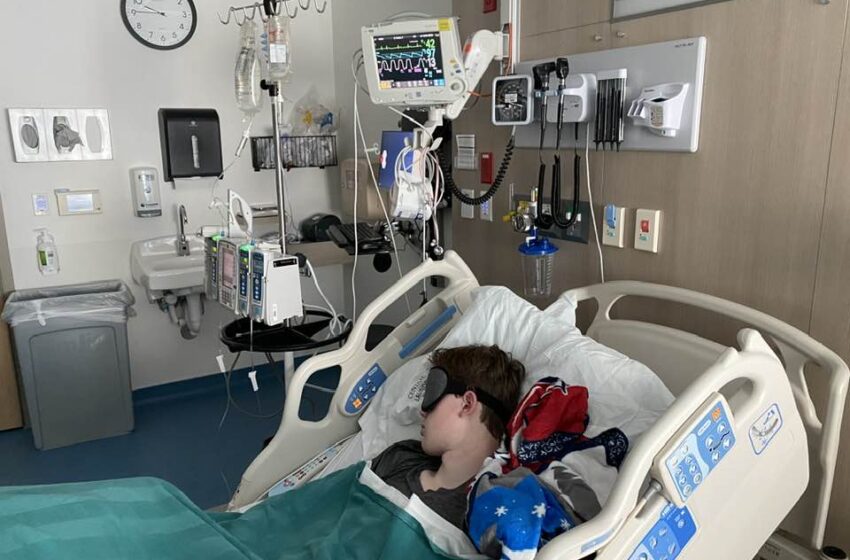 A mother in Draper, Utah broke her silence and revealed that her healthy son developed blood clots in his brain nine days after receiving the experimental mRNA Covid vaccine. Nearly a year later, another blood clot formed in his right leg and moved to his lungs.

Cherie Romney revealed that her son, Everest, was taken to the ICU with blood clots in his brain back in April 2021, 9 days after receiving the COVID vaccine. Medical records state that the blood clots were an “adverse reaction to the vaccine.”

Everest stands 6’9″ and was a basketball player prior to the incident.

“You all know someone this happened to (my son) It’s not as rare as people think. It is true [and] it is not misinformation. Happy to share his medical records with anyone who wants to see for themselves,” Mrs. Romney wrote.

“[The vaccine] has altered his life path forever. He is lucky to be alive today but his life will never be the same. In 2021, everyone who talked about this had their social media pages frozen. We need truth in reporting these events. It is not rare & it happened to us,” she continued.

Her son, Everest, was in ICU back in April 2021 (Source: Cherie Romney)

Everest was in ICU after suffering an adverse reaction from the vaccine (Source: Cherie Romney)

Mrs. Romney claimed that if she had listened and followed the doctors’ advice, her son “would not be alive today.”

“If I had kept quiet and listened to the [doctors] at first, Everest would not be alive today. While they admit now that they were wrong in the beginning, the resistance to even checking him for the blood clots was immense. Had we not persevered against them, there would be a very different ending to this story,” she said.

On Tuesday, January 3, 2023, Mrs. Romney gave an update about Everest.

She claimed that Everest had developed another blood clot in a deep vein in his right leg, and doctors had confirmed that his heart was still damaged due to the vaccine.

“Just left the Emergency Room TODAY. Everest has another blood clot, a deep vein in his right leg & they have confirmed his heart is still damaged. Referral to a cardiologist – more to come about his heart as it seems the damage from the inflammation may be permanent. Never mind the [effects] of the traumatic brain injury he still deals with on a daily basis,” Mrs. Romney wrote.

Mrs. Romney went on to blame the mRNA Covid vaccine and the Biden administration for suppressing information about the vaccine’s risks.