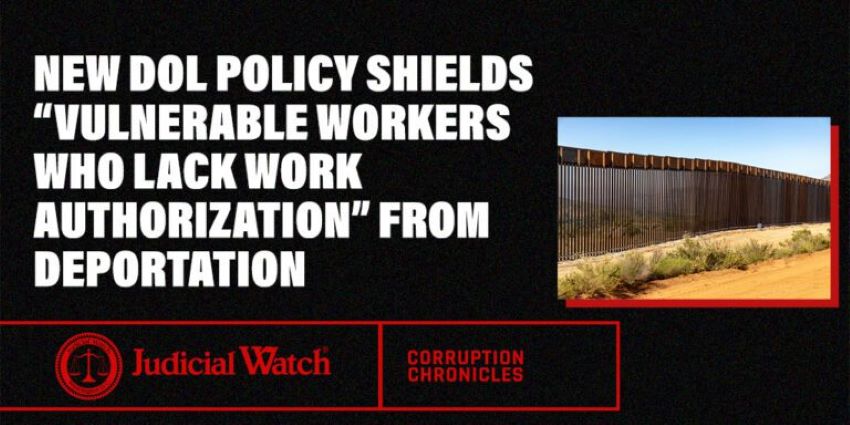 Days after an influential open borders group ordered the government to “promptly develop and implement” a policy to protect illegal immigrants involved in labor disputes from deportation, the Biden administration has obliged. This month the Department of Labor (DOL) issued a new measure, drafted in English and Spanish, offering immigration related prosecutorial discretion for undocumented workers involved in labor disputes with their U.S. employers. Created at the request of the Los Angeles-based Center for Human Rights and Constitutional Law, the policy directs illegal alien workers to contact the agency if they fear supervisors will try to get authorities to deport them for reporting workplace abuse. The DOL will then contact the Department of Homeland Security (DHS) to request the undocumented employee be protected from deportation, according to the measure.

“DOL’s mission and effective enforcement depends on the cooperation of workers,” the recently issued guidance states. “However, vulnerable workers who lack work authorization or sufficiently “portable” immigration status are often reluctant to report violations, engage with government enforcement agencies, or otherwise exercise their rights.” The document continues by offering the following example; undocumented workers who experience labor law violations may fear that cooperating with an investigation will result in the disclosure of their immigration status or that of family members, or that it will result in immigration-based retaliation from their employers and adverse immigration consequences for themselves or their family. “As a result, both workers and the Department face barriers to equitable and effective enforcement of workplace rights and protections, and the many employers that adhere to labor and employment laws face unfair competition.”

Undocumented workers experiencing a labor dispute are instructed to submit a statement of interest to the DOL in support of a request to DHS for immigration-related prosecutorial discretion, the new guidance says. Requesters should include a description of the labor dispute, any retaliation or threats experienced by workers, a description of how fear of potential immigration-related retaliation or other immigration enforcement in the future is likely to deter workers from reporting violations related to the labor dispute or otherwise cooperating with DOL. The agency will assess each request by considering several factors, including whether DHS’s use of immigration-related prosecutorial discretion would support DOL’s interest in holding labor law violators accountable and whether immigration enforcement of witnesses or victims could impede DOL’s ability to enforce labor laws or provide all available remedies within its jurisdiction. The agency will also consider the “likelihood that immigration enforcement could be an instrument used to undermine DOL’s enforcement of laws in the geographic area or industry and/or give rise to further immigration-based retaliation.”

In a press release celebrating the new policy the DOL explains that to carry out the laws it enforces, workers must feel free to participate in investigations and proceedings without fear of retaliation or consequences related to their immigration status. “The department has long supported DHS’ use of prosecutorial discretion – on a case-by-case basis – for certain workers subjected to abusive and exploitative labor practices,” the DOL writes, adding that “for decades, the department has memorialized this relationship through agreements with immigration officials.” As an example the agency lists an agreement between the DOL and DHS to work together to ensure that their respective civil worksite enforcement activities do not conflict and recognizing that effective enforcement of labor law is essential to ensure proper wages and working conditions for all workers regardless of immigration status.

It appears that the DOL issued its new policy to protect illegal immigrant workers in response to demands by the Center for Human Rights and Constitutional Law, an open-borders group that claims to protect the civil, constitutional, and human rights of immigrants, refugees, children, prisoners, and the poor. In the recent letter to DHS Secretary Alejandro Mayorkas and DOL Secretary Martin Walsh the group asks the administration to increase the willingness of immigrant workers to assert their labor and civil rights and ensure immigration enforcement does not become a tool of unscrupulous employers. “This letter is to provide support for the effort to promptly develop and implement a more robust policy aimed at encouraging immigrant workers to report labor law violations and cooperate in their investigation and to extend temporary protection from arrest or removal to immigrant workers engaged in labor disputes,” the group writes. Within days the administration implemented the new policy.