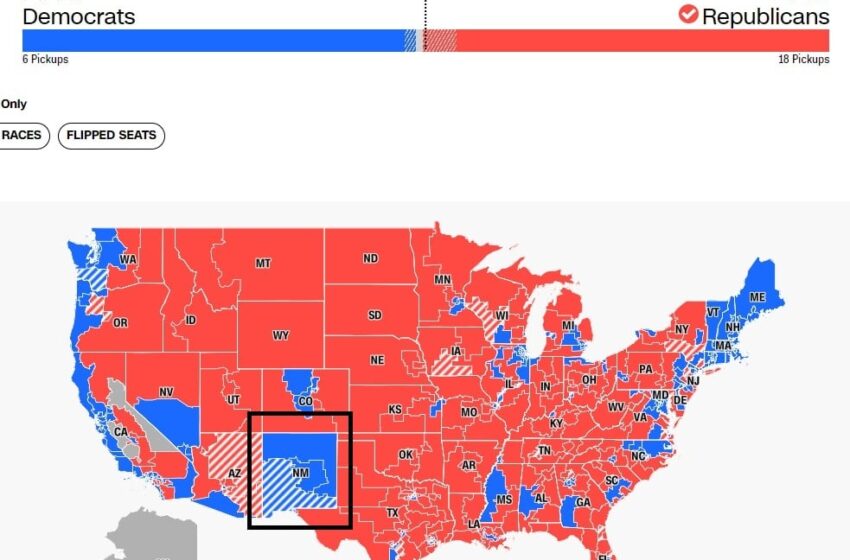 The results of the 2022 Midterms are frustrating to those in New Mexico who want a free and fair election.  The results weren’t transparent and were provided by the corrupt Secretary of State.

When you look at the map above you see that New Mexico is completely blue.  This is a House of Representatives map of the results from the current election.

But people who live in the state say this can’t be without election fraud.

Below are some activities going on in some of the counties in the state.

New Mexicans are concerned about the fact that all tabulators used for in-person voting in New Mexico have internal printers capable of making handmade-looking marks on ballots.  To attempt to be able to detect if their ballots were printed on during any subsequent audits, many voters planned to bring a blue pen to mark their ballots. That way it will be obvious if the tabulators, which are stocked with black ink, added any votes to their ballots. A guidance document published by the New Mexico SOS states, “a ballot properly marked with any device other than the marking device provided shall be counted.”

Screenshot from the SOS’s document:

The fact that any pen is a legal marking device in New Mexico didn’t stop the County Clerk, Robyn Holmes, from telling poll workers during their training before the election to take down the names of anyone who brought their own blue pen to fill out their ballot. She said she would be referring them to the District Attorney.

This is voter intimidation and a fourth-degree felony in New Mexico:

“NMSA 1-20-14. Intimidation. Intimidation consists of inducing or attempting to induce fear in any member of a precinct board, voter, challenger or watcher by use of or threatened use of force, violence, infliction of damage,         harm or loss or any form of economic retaliation, upon any voter, precinct board member, challenger or watcher for the purpose of impeding or preventing the free exercise of the elective franchise or the impartial         administration of the election or Election Code. Whoever commits intimidation is guilty of a fourth-degree felony.”

Clerk Holmes testified to the Otero County Commissioners that she was only joking when she threatened to prosecute voters over the pen they chose to use to mark their ballots. However, some Otero County election workers are currently preparing an affidavit testifying that the statement made by Clerk Holmes was in earnest and not a joke.