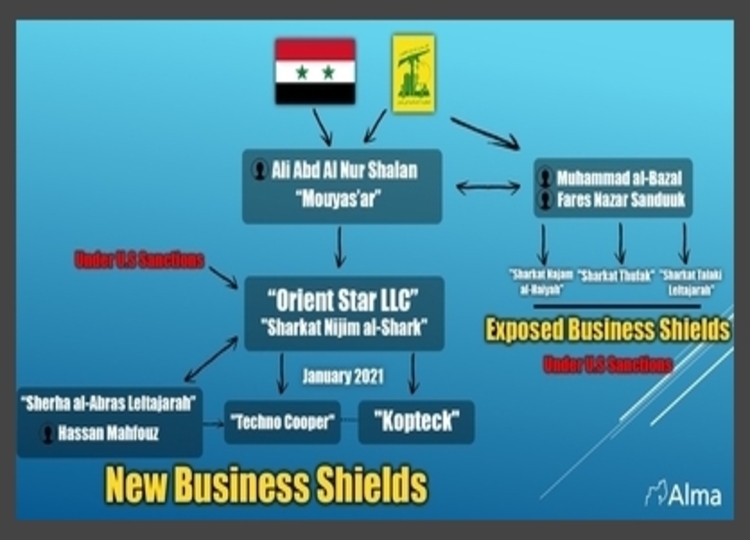 “Shalan is multi-skilled in buying and transporting weapons and chemical compounds. He has been doing this for many years,” former IDF intelligence officer Maj. (res.) Tal Beeri, who heads Alma’s research department, told the Investigative Project on Terrorism. Shalan also plays other key roles that serve Hizballah.

“Shalan is a Lebanese businessman whose business is carried out mainly in Syria, and has close ties to senior Hizballah figures,” the report said. Thanks to his longstanding experience in acquiring weapons for both Hizballah and the Assad regime, Shalan played a central role in Hizballah’s weapons acquisition program during the Syrian civil war, working under directives provided by the Iranian overseas Quds Force, which coordinates activity to strengthen Iranian proxies, Beeri said. “He is therefore considered a key facilitator for Hizballah’s weapons smuggling networks, and the organization’s main point man when it comes to purchasing and transporting weapons and explosives.”

The U.S. Treasury Department sanctioned Shalan in 2015, describing him as “Hizballah’s point person” for obtaining weapons and ensuring they get to the terrorist group and to “Hizballah personnel in Syria.”

Shalan’s ability to disguise weapons production facilities in civilian factories, his trafficking network, and his ability to keep coming up with new ways to evade sanctions, appear to have made him a very important component of the Hizballah arms network.

“During our work, we discovered that in January 2021, he set up alternative business shields,” Beeri said. “We do not know of sanctions on these companies.”

Shalan’s company partnered with other businessmen and companies to establish two companies, Techno Cooper and Kopteck, that manufacture and trade in electrical cables.

The companies “were formed to continue to circumvent the sanctions,” Alma’s report said. “The ‘business activity’ of the radical Shi’ite axis led by Iran continues under the cover of business shields.”

The report meticulously mapped out the network that created the two new companies. “Their co-founders were: As’ad Ma’ad, Mohammad Ayman al-Sadat, Imad al-Din Slough, Sherha al-Abras Leltajarah (company) and Hassan Abdul Rauf Mahfouz (the latter two – are partners in both companies, the rest are only partners in Techno Cooper). Sherha al-Abras Leltajarah is a large company with an immense reputation in the cable industry.”

According to Beeri, Shalan is also linked to a site in the Syrian town of Hassia, south of Homs, which produced precision guided missile components.

According to international media reports, the Homs area has repeatedly been struck by Israeli Air Force bombings, including a reported June 8 strike, presumably targeting attempts by Iran to entrench itself militarily in the area.

The same suspected missile production site at Hassia was bombed in November 2017. “From what we managed to collect, there has been very intensive Iranian activities there, in terms of precision guided missile production,” Beeri said. “There was a factory that created precise missile parts, embedded in a civilian copper and metal factory – which was owned by Shalan.”

“The factory’s code name was ‘Yasser Muhammad,'” said Beeri. “The factory illustrates the use of civilian shields to make weapons, and the use of business shield – all at the same time.”

In the months prior to the blast, international companies linked to the supply of ammonium nitrate began working with the Assad regime and Hizballah, said Beeri, sending ammonium nitrate to Beirut’s port, which later blew up.

“We found circumstantial indications that the ammonium nitrate was designated for the Assad regime, which was looking to circumvent U.S. and European Union oil and trade sanctions, banning the import of explosive material. One highly likely way that the Assad regime bypassed this was by using Hizballah’s procurement system via Shalan.”

“In order for the shipments to eventually reach the Syrian regime, the suppliers sent them to the port of Beirut addressed to Hizballah shell companies that consistently changed their identity,” the Alma report said. “After that, Hezbollah made sure to deliver, or rather smuggle, the shipments directly into Syria.”

Shalan was one of the suspects linked to the exposed network, the report said. “Shalan is a significant part of a complex network of Lebanese and Syrian businessmen working for the Assad regime and Hizballah, bypassing U.S. and European sanctions by setting up shell companies. We do not have concrete information on Shalan’s involvement in the ammonium nitrate issue in the port of Beirut. In our estimation, it is highly likely that Shalan, as a key figure in Hezbollah’s procurement and transport of weapons and components, was indeed involved in a very important procurement for the two allies, the Assad regime and Hizballah.”

A long history of supplying Hizballah

The Treasury Department’s sanction statement dates Shalan’s role helping Hizballah obtain weapons and equipment, and in shipping the materiel to Syria, back to 2009-10. “In 2010, Shalan was at the center of brokering a business deal involving Hizballah, Syrian officials, and companies in Belarus, Russia, and Ukraine regarding the purchase and sale of weapons. Further in 2010, he acquired a number of tons of anhydride, used in the production of explosives and narcotics, for use by Hizballah. In November 2009, Shalan coordinated with Hizballah and Syrian officials on the purchase and delivery of thousands of rifles to Syria,” it stated.

The Treasury Department also identified companies that Shalan set up, such as Orient Star, and three of the business shields set up to enable his activities, and placed them under sanctions. “These are fronts for covering for illegal activity of the radical Shi’ite axis,” Beeri said, “of which Shalan is the emissary.”

According to Alma’s report, Shalan co-founded and owns 99 percent of Orient Star company, founded in 2016 – one year after Shalan was hit with American sanctions.

Orient Start’s headquarters is located on the outskirts of Damascus. The remaining 1 percent belongs to a man named Faras Nazar Sanduuk, who Alma describes as a founding partner in three other companies holding just a 1 percent stake in each.

Those three companies are under American sanctions and are controlled by Muhammad Qassem al-Bazal, a Lebanese national who is also under sanctions, and “a collaborator with Hizballah and Iran facilitating the importing of fuel,” the Alma report noted.

“According to our indications, it was Faras Sanduuk who rented out the property on the outskirts of Damascus, where Shalan’s company resides,” it added.

Ultimately, said Beeri, the Iranian Quds Forces “knows that when it says, ‘I need these weapons moved to this location,’ Shalan will enable this. He can set up the sites in a civilian area, give them code names, and implement the plan.”