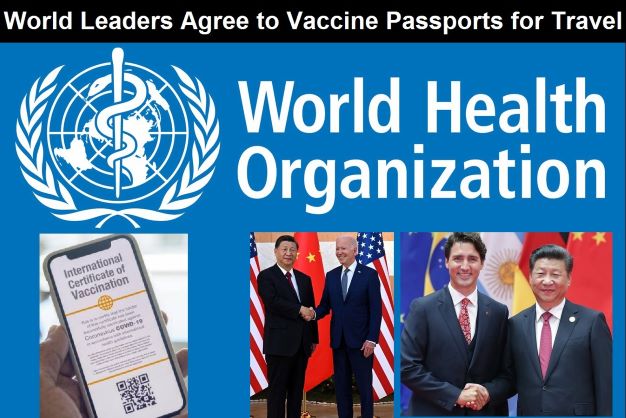 Of all the issues facing the world today that divide nations and cause countries to go to war against each other, there is one thing that unites the world and that virtually all world leaders agree upon, even those countries at war with each other, and that is the topic of vaccines.

And so at the recently concluded G20 Summit in Bali, they all put aside their differences and agreed that a universal vaccine passport is necessary for world travel, allowing the World Health Organization to be able to declare which vaccines are necessary for any current or future “pandemic.”

Isn’t that wonderful? Just give peace a chance, and get your vaccines!

He also forced everyone, small and great, rich and poor, free and slave, to receive a mark on his right hand or on his forehead, so that no one could buy or sell unless he had the mark, which is the name of the beast or the number of his name. (Revelation 13:16-17)

The light of a lamp will never shine in you again. The voice of bridegroom and bride will never be heard in you again. Your merchants were the world’s great men. By your medicines* all the nations were led astray. (Revelation 18:23)

(*The Greek word in the original texts here is pharmakeia, and “medicines” is the correct English translation, but because Christian Churches and their clergy, who are the main purchasers of English translations of the Bible, are pro-pharma and view the English word “medicine” as positive, this Greek word is usually translated as “witchcraft” or “sorcery” or other such words in English Bible translations.)

By all accounts, the G20 summit in Bali was a smashing success. After tireless multipolar efforts, the famed intergovernmental forum announced the creation of a global health-preserving Pandemic Fund sponsored by the WHO, the World Bank, Bill Gates, and the Rockefeller Foundation. The fund will ensure there is plenty of money for experimental genetic vaccines in the weeks, months, and decades ahead.

In the same spirit of cooperation, Moscow suggested enveloping the whole world in Virus-detecting kiosks—a proposal based on Russia’s own “sanitary shield” program.

But these are mere trifles compared to the forum’s crowning achievement: the adoption of the G20 Bali Leaders’ Declaration.

G20 – BREAKING: leaders have just signed a declaration which states that vaccine passports will be adopted to “facilitate” all international travel

This means any vaccination the WHO determines you should have.

Silence from the media. pic.twitter.com/0pHISCcVaM

From page eight of the document:

We acknowledge the importance of shared technical standards and verification methods, under the framework of the IHR (2005), to facilitate seamless international travel, interoperability, and recognizing digital solutions and non-digital solutions, including proof of vaccinations.

We support continued international dialogue and collaboration on the establishment of trusted global digital health networks as part of the efforts to strengthen prevention and response to future pandemics, that should capitalize and build on the success of the existing standards and digital COVID-19 certificates.

If you want to read the whole thing, you can download the PDF generously hosted on the Kremlin’s official website.

The titillating declaration includes much more than just a pledge to create an international injection Ausweis. Contained within its pages are purple prose about “sustainable development”, “digital transformation”, “interoperability of Central Bank Digital Currencies (CBDCs) for cross-border payments”, and many other tasty multipolar morsels.

There is even a line about how the conflict in Ukraine is “exacerbating existing fragilities in the global economy.”

The G20 has issued a formal decree promoting vaccine passports as preparation for any future pandemic response in its final communique. Indonesian Health Minister Budi Gunadi Sadikin, speaking on the matter on behalf of the G20 host country, had earlier in the summit called for a “digital health certificate” using WHO standards.

Sadikin advocated for that he dubbed a “digital health certificate” which shows whether a person has been “vaccinated or tested properly” so that only then “you can move around”. Watch his comments during a G20 Bali panel discussion earlier in the week…

“Let’s have a digital health certificate acknowledged by WHO… if you have been vaccinated or tested properly, then you can move around”, said the Indonesian health minister in Bali…

The following is introduced in Article 23:

We acknowledge the importance of shared technical standards and verification methods, under the framework of the IHR (2005), to facilitate seamless international travel, interoperability, and recognizing digital solutions and non-digital solutions, including proof of vaccinations.

We support continued international dialogue and collaboration on the establishment of trusted global digital health networks as part of the efforts to strengthen prevention and response to future pandemics, that should capitalize and build on the success of the existing standards and digital COVID-19 certificates.

Interestingly, the next paragraph of the formal declaration, article 24, goes on to describe the need to for global institutions to fight against ‘disinformation’.

Article 24 of the final G20 declaration begins, “The COVID-19 pandemic has accelerated the transformation of the digital ecosystem and digital economy.”

And then leads into to the following statement later in the section: “We acknowledge the importance to counter disinformation campaigns, cyber threats, online abuse, and ensuring security in connectivity infrastructure.”

So as predicted by many early on in the pandemic (who were all dismissed and condemned as “conspiracy theorists”), a future proposed standardized vaccine passport will be accompanied by efforts for greater standardization and policing against ‘disinformation’ – likely to include any speech critical of the type of regimen that G20 leaders wish to enact.