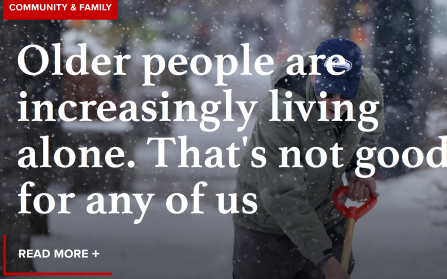 For Americans aged 50 and older, living alone is on the rise. This increase isn’t a result of the COVID-19 pandemic . Instead, it’s been decades in the making. Among other things, it is a result of shifting attitudes toward marriage, careers, and children.

The current fertility rate of 1.7 births per woman is well below the 2.1 births per woman replacement level rate. It has been this way for years. An aging, more secluded population combined with fewer births is a recipe for an even lonelier society and one in which assistance for the elderly is neither guaranteed nor supported.

There is little doubt that delaying marriage has had a detrimental effect on people’s lives. Marriage often produces children, family stability, and a stronger society at both ends of the age spectrum. Acco rding to census data , the median age of a first marriage in 1950 was 22.8 years for men and 20.3 years for women. In 2022, the median age is 30.1 and 28.2, respectively. The rates have steadily climbed with each passing decade. Naturally, the older a couple is at the time of marriage, the less likely they are to have many, or even any, children. This profoundly affects the future.

Even couples who do have children find the dynamic has shifted when compared to that of their parents’ generation. As noted in a recent New York Times article, “the trend has also been driven by deep changes in attitudes surrounding gender and marriage. People 50-plus today are more likely than earlier generations to be divorced, separated or never married.” Those in this aging, increasingly isolated segment of the U.S. population have many concerns, including the ability to retire, the availability and affordability of elder care, and housing prices.

The strong sense of community previous generations experienced has largely been replaced by a false sense of togetherness in the form of social media and other online pursuits. In general, society may feel more connected, but reality shows that’s not the case. Spending time alone is on the rise for all people aged 15 and older. And like the increase in those 50 and older who live alone, this broad type of loneliness started increasing well before the pandemic.

Quite a trend line here. This can’t be good for us.https://t.co/ZcBpxAMyxa pic.twitter.com/glknEFk424

None of these factors make for a cheerful report. If anything, they serve as a reminder that family is our most valuable asset, children are good, and fostering a sense of actual community, not just its online substitution, is necessary for a healthy culture. For too long, the message has been that independence and career achievement should be prized most of all. There is nothing wrong with establishing one’s individual identity or advancing in a chosen field. But these things pale in comparison to the rich physical, mental, and emotional rewards of bonds with friends and family.

A leftist narrative that says children are bad for the planet or are a drain on life is one that only encourages isolation and loneliness. The data point to the need for more security and familial connection. These are the things that see us through the good and bad in life. Without a course correction, the outlook for American society looks bleak. Our extreme political and cultural division only lends itself to more isolation.

It would behoove all of us, regardless of age, to take a step back and focus on what really matters. That would not only improve life as we know it now but set a better foundation for us, and others, in the future.

Kimberly Ross ( @SouthernKeeks ) is a contributor to the Washington Examiner’s Beltway Confidential blog and a columnist at Arc Digital.

Venezuela is a bizarre piece of Biden’s incoherent energy policy puzzle
By: Katie Tubb
Why Congress should reject Manchin’s permitting bill and enact genuine reform in 2023
By: Daren Bakst
Can Lady MAGA, the conservative drag queen, save drag?
By: Tristan Justice

Sign up now to get the Washington Examiner’s breaking news and timely commentary delivered right to your inbox.
OPINIONBELTWAY CONFIDENTIALBLOG CONTRIBUTORSFAMILY ISSUESOPINIONSENIORSMENTAL HEALTH
Share your thoughts with friends.
Share on: