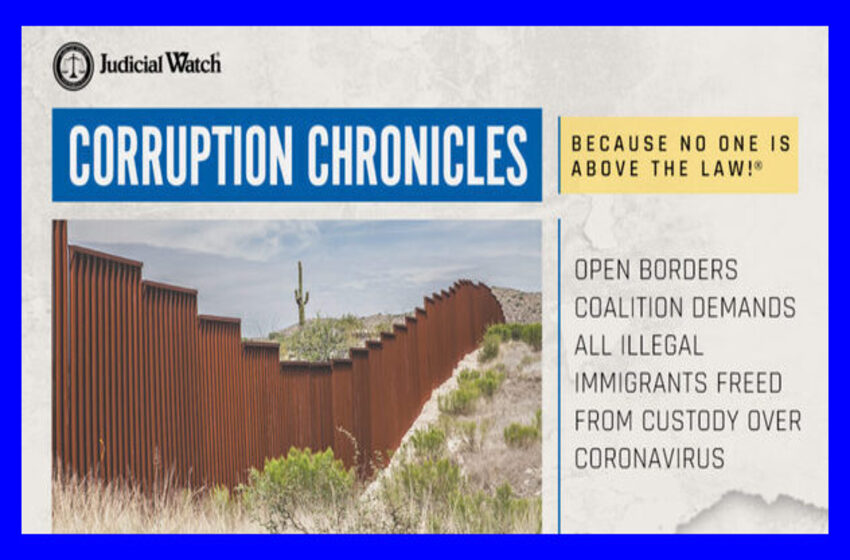 Although there have been no confirmed cases of Coronavirus disease in federal immigration detention facilities, open borders groups are taking advantage of the health crisis to demand that all illegal aliens be immediately released from custody and into communities throughout the United States. The movement, known as FreeThemAll, was launched this month by a coalition of leftist nonprofits long critical of the Trump administration’s hardline immigration policies. “The immigrant community is at grave risk,” according to one of the groups leading the effort, Texas-based Refugee and Immigrant Center for Education and Legal Services (RAICES). The public is encouraged to contact Immigration and Customs Enforcement (ICE) to demand that the agency “release all immigrants in detention, because detention is no place for a family, and no place for a family to be during a pandemic.”

In a letter to ICE San Antonio Field Director Daniel Bible, RAICES Executive Officer Jonathan D. Ryan asks for the immediate release of detained illegal immigrant families and individuals due to COVID-19. He also urges ICE to suspend all deportation activity, citing unsubstantiated reports that illegal aliens deported from the U.S. have presented the first cases of COVID-19 in their countries of origin. “ICE should not participate in the spread of this dangerous virus around the world,” Ryan writes. “This is a public health emergency. It is critical that ICE detention centers and jails be prepared to respond appropriately to the crisis.” He continues to blast the agency by asserting that the U.S. government has a woeful history of addressing pandemics in ICE detention. “We are concerned about the health and safety of our clients who, with their liberty restricted in detention, cannot practice recommended social distancing from other detained persons or from detention center staff,” the RAICES chief writes.

The group is part of a broader movement in the U.S. to release all illegal immigrants housed in federal detention centers throughout the country. Hundreds of immigrant rights advocates, human and civil rights groups and other leftist organizations are also pressuring federal authorities to release illegal aliens in federal custody via the Detention Watch Network, which aims to abolish immigration detention in the United States. “Detention Watch Network imagines a world where every individual lives and moves freely and a society in which racial equity is the norm and immigration is not criminalized,” according to the group’s website. “The abolition of immigration detention is part and parcel of struggles against racism, xenophobia, discriminatory policing, and mass incarceration and our aims coincide with these broader struggles against racialized oppression.”

In a letter signed by 763 like-minded groups, Detention Watch Network orders ICE Director Matthew T. Albence to immediately release all people currently detained in immigration detention, cease all local enforcement operations and eliminate ICE check-ins and mandatory court appearances. The coalition also requests that the federal government make phone and video calls free for detainees and that fees be waived for all costs associated with soap, sanitizer and other hygiene products. If the government doesn’t release all detainees, the letter asks for a “commitment that at no point will a facility be locked down or closed off to outsiders or be considered in its entirety as a place of quarantine” so that family members and attorneys maintain access to the incarcerated. “Jails, prisons and detention centers are sites where people are acutely vulnerable to health complications and the impact of outbreaks,” the letter states. “Choosing to deprive people of their freedom contributes to the already lethal conditions of mass confinement.” Signatories include: Abolish ICE Denver, Allies to End Detention, Asians 4 Black Lives Portland, California Sanctuary Campaign, CASA-Maryland and Compañeros Inmigrantes de las Montañas en Acción.

ICE currently has 37,311 illegal immigrants in detention facilities, according to the latest agency figures. More than half—19,526—have criminal convictions or pending criminal charges, the records show. As of March 14, U.S. Citizenship and Immigration Services (USCIS), the agency that administers the nation’s lawful immigration system, determined that 5,867 of the illegal aliens in ICE custody have an established persecution or torture claim.