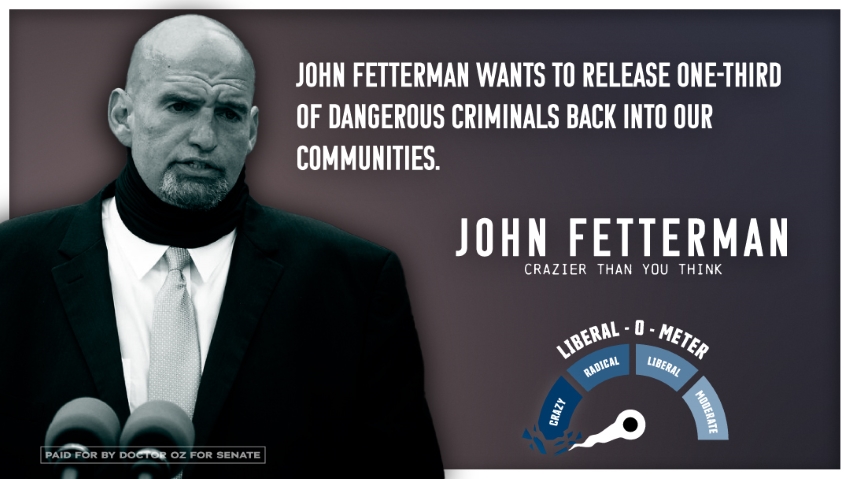 ANOTHER DEMOCRAT THAT WANTS TO DESTROY AMERICA

Republicans have put up (and even elected) a bevy of awful federal candidates this year and in the recent past, but none of them are any more unfit for office than Democratic Senate nominee John Fetterman of Pennsylvania.

With all due sympathy for a man recovering from a stroke, it must be said: Fetterman was a ludicrous candidate even before his stroke, and now he shouldn’t even be in the race. Just a few weeks after his May 13 stroke, it should have been evident that his health was not adequate for one of the top jobs of public service in the world. Only 100 people, out of some 330 million, are given the burden and privilege of being senators. It’s an office that performs a vital function; it’s not a merit badge and shouldn’t be a rehabilitation center.

It is thus no knock on Fetterman’s character or a judgment about his long-term prospects for a high-quality life to demur about his fitness for this particular office. With all due respect, for an institution once known as the “world’s greatest deliberative body,” a man who cannot keep track of deliberations in real time is not an able delegate for the constituents he serves. A political campaign is a job interview, and a man with communication difficulties is no more right for a job in the Senate than a man who can’t lift an ax is right to be a lumberjack.

Even before his major stroke, though, Fetterman was a terrible choice for the Senate. He was a freeloader off his parents well into his 40s and was the failed mayor of a tiny town (elected with fewer than 300 votes total) before being elected lieutenant governor in a triumph of style over substance. With his shorts, hoodie, bald head, goatee, tattoos, frequent profanity, and 6’8” height, he gave off a blue-collar vibe completely at odds with his privileged youth and radical ideology.

Fetterman dodged paying due taxes for years. He oversaw a crime hike in his town, helped release at least 10 criminals convicted of first-degree murder, and wants to eliminate cash bail. He supports the end of the fracking industry that directly employs some 24,000 Pennsylvanians, and he supports Bernie Sanders’s socialism. And even for the low-requirement elected jobs he held, he missed work a third of the time.

Voters in Pennsylvania and elsewhere need to take their own responsibilities more seriously. Getting public policy right really does take knowledge, understanding, and, usually, experience. Voters who want to blow off steam, follow cultural cues (which can be easy to fake, by the way), and “send messages,” rather than hiring/electing people with relevant skills and knowledge (not to mention cognition), are elevating to high office people who just can’t do their jobs well.

This isn’t a call for rule by a self-selected elite of supposed experts, but it is an insistence that there is a level of competence below which voters shouldn’t accept a candidate. Fetterman has done absolutely nothing, even when healthy, to show the right abilities or wisdom to be a good senator. Now that he has been victimized by bad health, he shouldn’t be anywhere near that office.

Unless Pennsylvania Democrats want to try the same sort of exotic candidate switch that Georgia Republicans should but won’t do, Fetterman will remain on the ballot. The box by his name, though, certainly should not be checked.