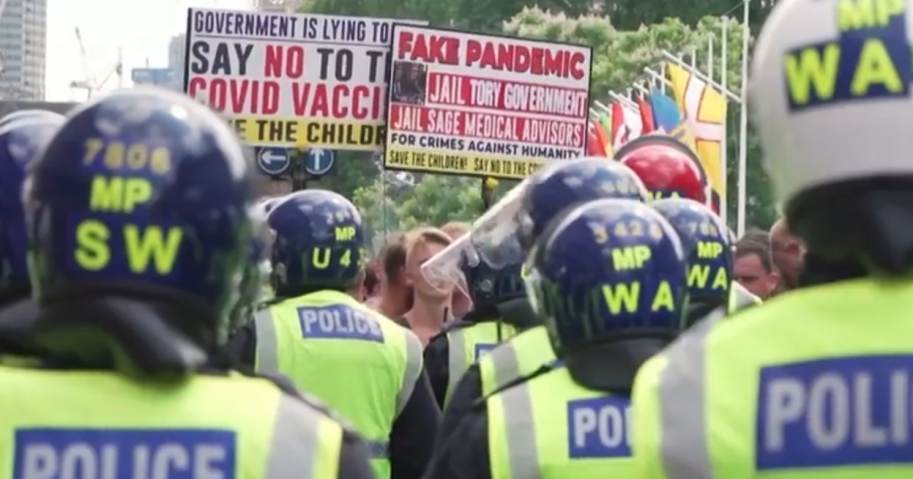 On Monday, after over a year, the last of the UK’s Covid restrictions were finally lifted. Instead of being able to celebrate a feeling of normalcy, thousands of protesters took to the streets of London because of the possibility that more lockdowns and even vaccine passports could be coming very soon.

The massive crowd gathered at Parliament Square near Westminster Palace. They chanted “Freedom” and held signs that showed their frustration with the authoritarian lock-down measures.

They also took aim at their globalist leaders and the law enforcement officers that do their bidding, calling them “nazi scumbags” and shouting “arrest Boris Johnson” and “shame on police.”

Demonstrators were met with a heavy police presence. As the hot day continued, members of the crowd began throwing bottles at the officers which caused them to respond with punches.

Videos from the event show officers brutally beating members of the crowd as they drag them away.

In one of the videos, a man is arguing with a policeman who abruptly shoves him to the ground and proceeds to ruthlessly beat him with other officers who jumped in to assist.

| WATCH: More coverage of arrests being made earlier today

Metropolitan police confirmed that 11 people had been arrested so far.

The people of London, Cuba, Taiwan, Hong Kong, France, and numerous other places around the world have had enough of their governments using the covid hoax to tighten their tyrannical grip on power. They are