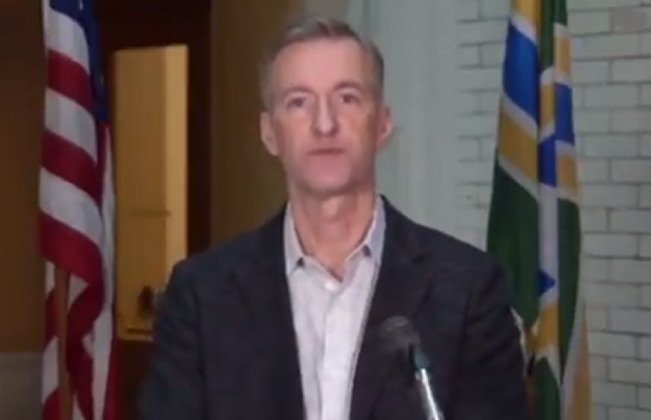 Portland Mayor Ted Wheeler has been trying to act in good faith with the radical Antifa rioters tearing apart his city. It has gotten him nowhere.

They began rioting in May of last year. It is now January of 2021 and they are still going.

Now Wheeler is finally starting to figure out that he can’t negotiate with these folks.

Wheeler laid out the “who, what, when, where and why” of what happened Thursday.

“The who: violent antifa and anarchists,” the mayor said. They rampaged through downtown Portland causing tens of thousands of dollars of damage with spray painting, window breaking, fires and fireworks.

“Why? This is the hardest question of all to answer,” Wheeler said. “Why would a group of largely white, young and some middle age men destroy the livelihood of others who are struggling to get by?”

The mayor said he sees himself as a caring and honest person. “It is hard for me to accept that there are some people who are just bent on destruction.”…

“My good faith efforts at de-escalation have been met with ongoing violence and even scorn from radical antifa and anarchists,” Wheeler said. “In response it will be necessary to use additional tools and to push the limits of the tools we already have to bring the criminal destruction and violence to an end.”

Portland Mayor @tedwheeler: My good faith efforts at de-escalation have been met with ongoing violence and even scorn from radical antifa and anarchists.

It’s time to push back harder against those who are set on destroying our community.”pic.twitter.com/aj5rjyPTXE