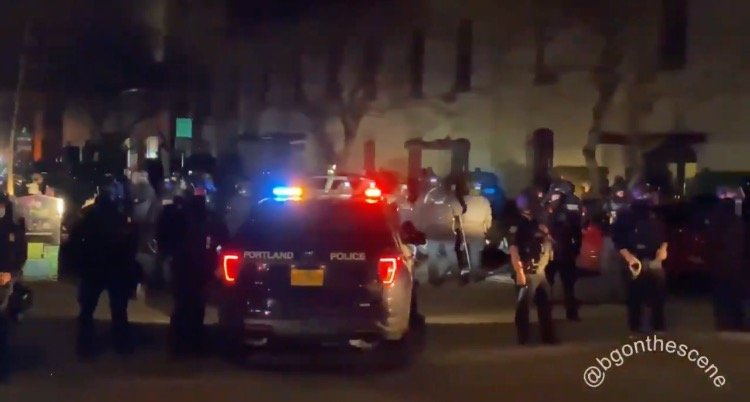 Portland Police had enough of Antifa smashing windows and rioting in the streets Friday night so they kettled the large mob and made arrests.

Kettling is a police tactic for controlling large crowds during a protest.

Police cordoned off a street in Portland’s Pearl District and said all persons within the limited area will be temporarily detained.

About 100 goons were kettled and 13 arrested.

“You are being detained for the investigation of a crime,” Portland Police said.

“You are being detained for the investigation of a crime” Portland Police have kettled a large crowd down a side street here in Portland’s Pearl District #Portland#PortlandProtestspic.twitter.com/ZOA9R7srHt

“This is a temporary detention, we will be removing you one at a time,” Portland Police told protesters.

“This is a temporary detention, we will be removing you one at a time” Portland Police make an announcement as they kettle a crowd of around a hundred after several windows were smashed #Portland#PortlandProtestspic.twitter.com/OmX7bKJotJ

One of the Antifa goons was stunned that he and his fellow comrades were being kettled.

Holy shit we are getting kettled

We are all being detained

We are to sit down and stay where we are until given further orders pic.twitter.com/KAya4hXLue

He/She whined about being boxed in.

This is new. There has never been an actual kettle in Portland. No mass arrests

Someone just threw a bottle at the cops

Ex-NYT editor & #antifa booster Sarah Jeong is not happy the Portland Police responded to stop the rioters from breaking more property in a residential area of NW Portland. https://t.co/46GQUiO8wlpic.twitter.com/gnuPyZLwNq

“Those that were being detained were identified and photographed, as part of a criminal investigation, before being released,” PPB said in a release early Saturday. “Some refused to comply and locked arms together in an effort to interfere with the investigation. Officers escorted them away and they were arrested.”

“As the event unfolded, groups formed on the outside and physically challenged officers. Some threw rocks and full cans of beer at officers,” PPB said. “Officers deployed some OC spray and one impact munition.”