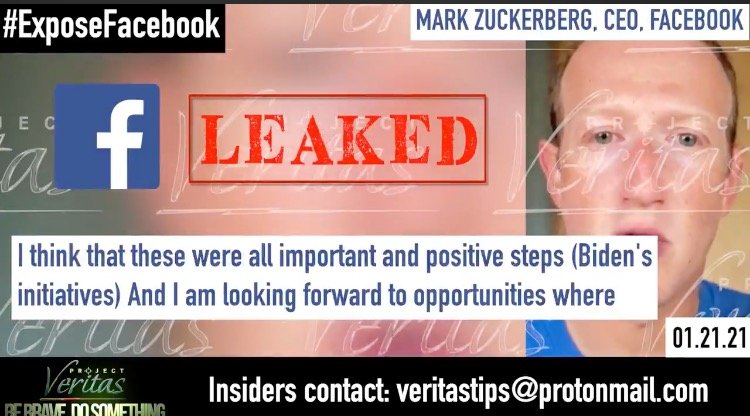 James O’Keefe and his Project Veritas team have obtained hours of leaked video from a brave insider at Facebook.

This person still works at Facebook and is willing to continue exposing Zuckerberg and his organization’s corruption.

Zuckerberg was caught on video discussing President Trump’s last few weeks in office: “The president [Trump] intends to use his remaining time in office to undermine the peaceful and lawful transition of power.”

Zuckerberg said he wants to work with Biden Administration: “President Biden already issued a number of Executive Orders on areas that we as a company care quite deeply about and have for some time. Areas like immigration, preserving DACA, ending restrictions on travel from Muslim-majority countries, as well as other Executive Orders on climate and advancing racial justice and equity. I think these were all important and positive steps.”

“We also have the first woman and the first person of color as our vice president in the history of our country…The swearing in of Vice President Harris really stands as a reminder that despite the challenges that we are facing as a country, we all have so much to be proud of,” Zuckerberg said.

Facebook is not only a publisher, they have given Democrats free advertising space by shadowbanning and censoring conservatives while boosting Democrats.

Facebook censors political speech and promotes far-left, partisan objectives while enjoying the protections under section 230 of the Communications Decency Act.

Zuckerberg has repeatedly testified to Congress that Facebook does not censor or police political speech.

“Biden already issued a number of exec orders on areas that we as a company really care quite deeply about”#ExposeFacebookpic.twitter.com/KNd0BU7biP