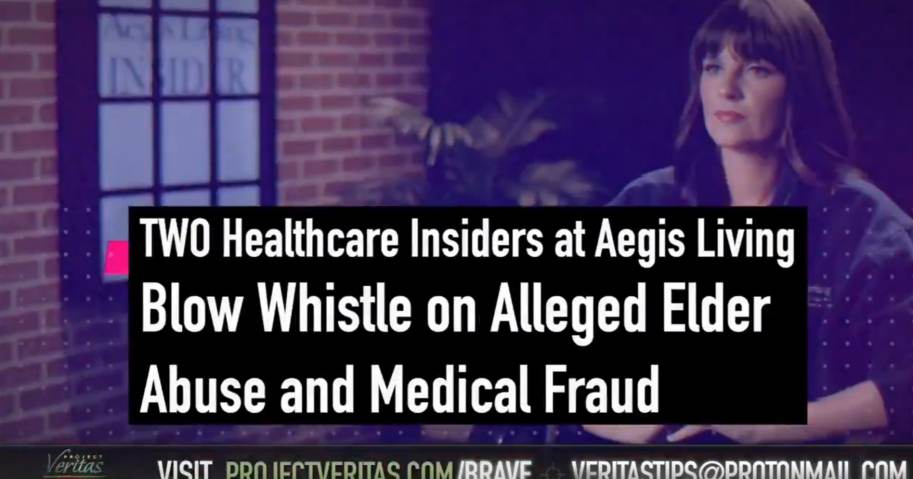 Two brave whistleblowers who were previously working for an Aegis Living location in Issaquah, Washington, have sounded the alarm and come forward with allegations of elder abuse and medical fraud.

Healthcare workers Cassandra Renner and Jonathan Schlect, detailed the shocking allegations against the facility in a bombshell new report by Project Veritas.

Renner, who was a former medical technician at Aegis Living, explains that workers are only able to provide about half of the necessary care for the residents at the Aegis facility and that supervisors are forging the signatures of other staff members to give the illusion that the required treatments are being completed.

We can probably, on a good day, get about 50% of what these people are paying for done.”

According to Renner, her signature has been forged to indicate care has been completed “multiple times.”

“I had found out that my signature had been forged multiple times. Someone signed for me to claim that I completed a service that I specifically did not sign because it was not completed.”

The other whistleblower, Jonathan Schlect, confirmed her account and even admitted that he was one of the employees that was forging the signatures under direct order of his supervisors.

“The first time I ever did ADLs (Activities of Daily Living) and forged peoples signatures was my first time being trained in.

“I would put people that I worked with’s signatures, writing in fake temperatures.

It’s a big HIPA violation, it’s forgery, it’s lying about services and also the residents [are] getting charged.

Supervisors did not mix words either, he was told he would be reprimanded if he did not comply.

“I was told by the Care director Jen that if i didn’t, I would be out of compliance with my job and not following her direction and I would be written up.

Jen would want it to be done for state, for when state comes, and the main goal was to make sure everything is done correct so the State [doesn’t] ding us. So we can maintain our perfect reputation.

The “Jen” that Schlect is referring to is the head care director, Jennifer Swan.