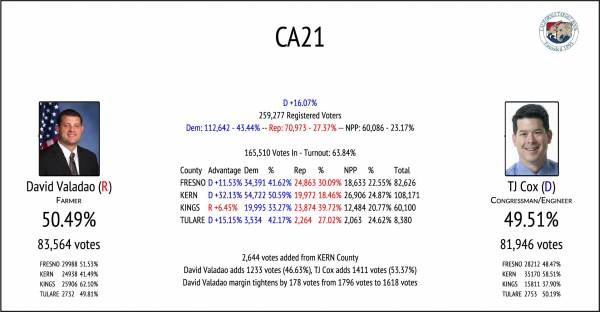 All eyes have been on California district 21 as Republican David Valadao and Democrat TJ Cox battled it out in Fresno County weeks after Election Day.

Kings County’s Elections Department announced they were suspending canvassing operations until Saturday, November 21st due to a COVID-19 exposure.

It is now being projected that Valadao will win California district 21.

Nov. 20, 2020, 4:21 p.m.: With an update of 11,472 provisional ballots breaking 53.67 percent for Rep. TJ Cox (D–Fresno) and putting an insufficient dent into his deficit, The San Joaquin Valley Sun is projecting that former Rep. David Valadao (R–Hanford) will reclaim his seat in Congress.

Current estimates for remaining uncounted ballots in Kern County – the bluest portion of the south Valley district – sit in the 8,000 ballot range, requiring Cox to win more than 80 percent of remaining ballots.

Other reporters following this race also projected Valadao as the winner.