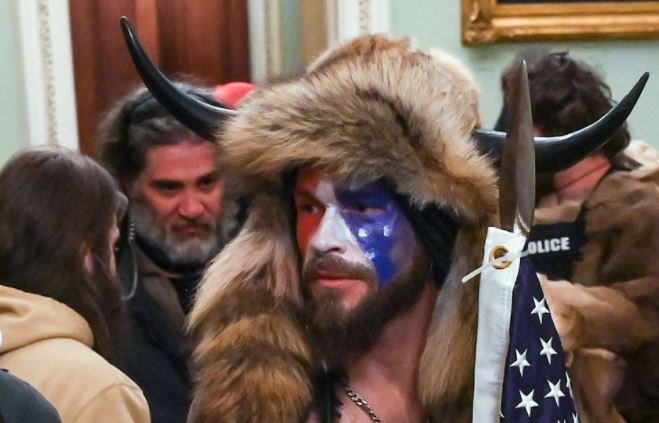 In the last year Americans — and their president — lost their freedom of speech.

In the last year Democrats stole a landslide election from the most popular candidate in modern history.

And now, just like that, we’ve reached peak Marxism.

Jacob Chansley, the horned shaman seen roaming around the hall of Congress on January 6th, has been locked up in Washington DC since his arrest — without bail.

Jacob did not cause any violence, he listened to officers and he was let in the building by Capitol Hill police.

Earlier this week Chansley’s attorney Al Watkins had a hearing in Washington DC in an attempt to free Jacob Chansley from jail before his trial.

The prosecutor, Assistant U.S. Attorney Kimberly Paschall, argued that Chansley should not be released because he might talk about election fraud once he is released.

Chansley is not the one who should be jailed.

She said Chansley had traveled to Washington with others and had a large online following, and there would be no guarantee that he wouldn’t continue pushing his false claims about election fraud once released.

U.S. District Judge Judge Royce C. Lamberth did not immediately rule on the issue, but did ask Watkins how he’d arranged an interview between Chansley and “60 Minutes,” saying he’d not given permission for it, as required.