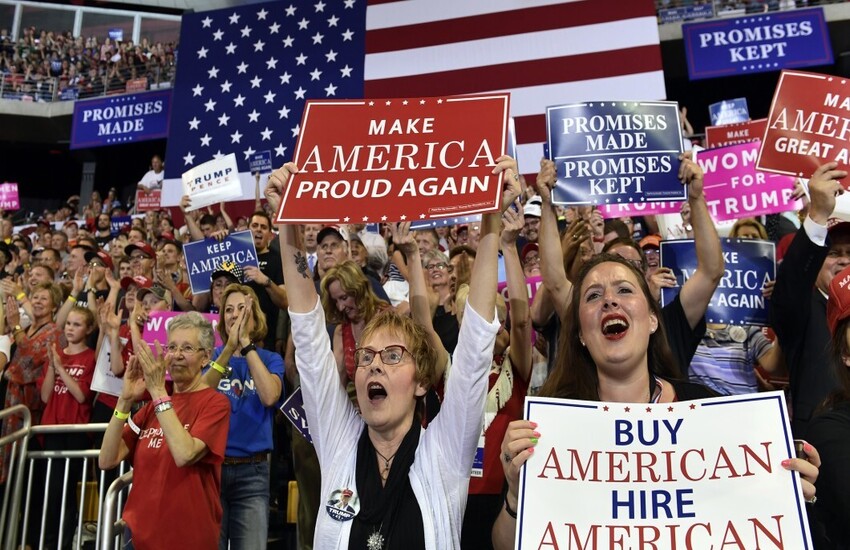 David M. Drucker   21 minutes ago
President Trump is leaving office rejected by key Republicans in Washington and elsewhere but with loyal grassroots conservatives poised to back him for the White House again in 2024 — despite his incitement of the violent siege of the United States Capitol.

President Trump is leaving office rejected by key Republicans in Washington and elsewhere but with loyal grassroots conservatives poised to back him for the White House again in 2024 — despite his incitement of the violent siege of the United States Capitol.

Prominent Republicans aligned with Trump the past four years, including members of his administration, broke with the outgoing president after he encouraged supporters to march on the Capitol and derail certification of President-elect Joe Biden’s Electoral College victory. Trump’s defiant attempt to pressure congressional Republicans to ignore the Constitution and overturn his loss in the Nov. 3 election failed. Biden’s win was affirmed after the violence subsided in an early Thursday morning vote.

The episode triggered a wave of White House resignations and rebukes from Republicans on Capitol Hill. Transportation Secretary Elaine Chao, wife of Senate Majority Leader Mitch McConnell, resigned. Arkansas Sen. Tom Cotton, a Trump ally and likely 2024 contender, said on Fox & Friends the president should stop lying to his supporters with claims the election was stolen and his defeat reversible. Trump, chastened, finally acknowledged Biden would be inaugurated Jan. 20.

But grassroots Republicans overwhelmingly agree with Trump’s argument that he beat Biden in a landslide and was cheated out of a second term through broad, coordinated conspiracy, and GOP strategists in Rust Belt states that fueled the 45th president’s rise say he remains in strong contention for their support four years hence if he mounts a third White House bid.

“Trump will continue to be a player and have a significant following,” said Saul Anuzis, a Republican operative in Michigan and former voting member of the Republican National Committee. “If he decides to run, he will be the guy to beat.”

When Trump placed a telephone call to a meeting of RNC members gathered in Amelia Island, Georgia, for the party’s annual winter business meeting, he was met with robust applause. Joe Gruters, chairman of the Florida Republican Party, said nothing that occurred Wednesday diminished Trump’s hold on the GOP or sparked second thoughts among his most fervent supporters. “People love the president,” he said. “This is the president’s party.”

After Wednesday’s unrest at the Capitol, not all Republicans agree. Contrary to Gruters’s comments, a GOP official also present at the RNC winter meeting told the Washington Examiner that party members’ reactions to the president’s conduct were more mixed. “There is both great concern and denial,” this Republican insider said, requesting anonymity in order to speak candidly.

Democrats and Republicans are referring to the storming of the Capitol as an “insurrection.” Trump initially refused to scold the trespassers or tell them to disperse. Eventually, he tweeted a video urging the protesters to behave peacefully. But the president rationalized their conduct by saying that their frustration was understandable in light of the fact that their votes were nullified by a stolen election. That tepid response drew further scorn from some Republicans.

They are convinced Trump did significant damage to his political standing that will become apparent months from now, when he can no longer lean on the power and trappings of the presidency to bolster his image. At the very least, these Republicans say, Trump would no longer clear the field of GOP primary candidates if he chose to run for president again in 2024, a reversal of what most party insiders assumed just a few weeks ago.

“I think that the events of yesterday would definitely be hung around his neck,” said John Couvillon, a Republican pollster in Louisiana. He explained that Trump’s problems are compounded by GOP losses in a pair of runoff elections Tuesday in Georgia that handed control of the Senate to the Democrats. “Association with President Trump in any way, shape, or form is professionally toxic right now.”

Katherine Doyle contributed to this report.

Join us we are the Republican On our web page conservativechoicecampaign -Use the join us tab to do so.