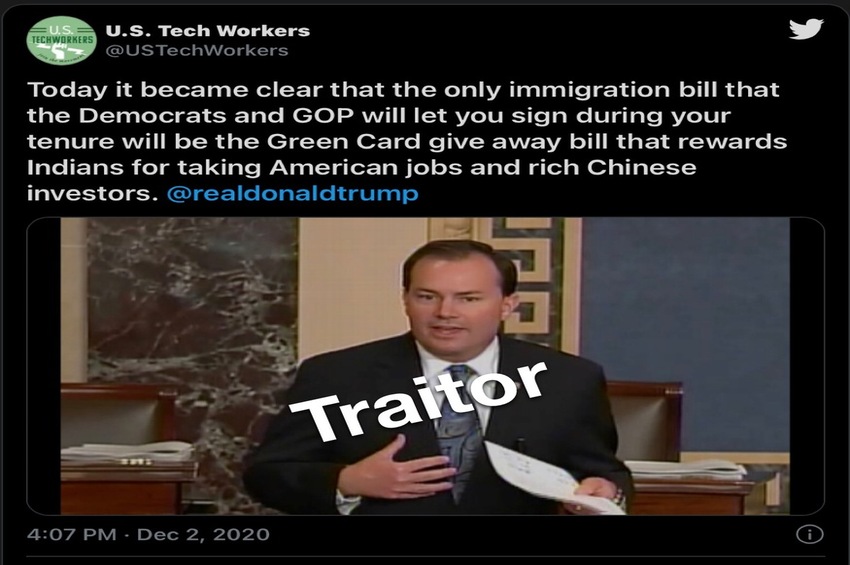 The bill is a huge green card giveaway that would eliminate the country caps on permanent visas and increase the per-country numerical limits for family-sponsored immigrants.

Not a single Republican senator was willing to stand up for the rights of the American worker.

Our treasonous Senate once again sticks it to American IT workers with cheap Indian labor. They duped amd used us by getting our votes.  They aren’t even making an attempt to represent us.  Afterall, Mitch is saying there is no need to object to the votes on January 6, 2021 when they are read into the congressional record.  That right there was a dead giveaway.  Mitch is standing by China Joe who sold his soul to China.  Afterall, Mitch is married to Elaine.  That means that Mitch has some pretty heavy China ties as well! Aren’t you reasonably curious what kickbacks were put into their pockets by the cheap labor lobbyists? They did not vote for this because it was good for the country.  They voted for this because it was good for their pocket books, while American workers are sitting at home unemployed.

The Republican party will never, ever again receive one dollar from me! I am done – I am walking away from the party. Please understand this is not a statement based upon emotion.  It is a statement of fact.  It would help if you did the same thing. If we all walk away, the Republican party will never again win an election! Our elected Republican officials are members of the globalist elites and communists that want to take us down.  They proved it yesterday.  I will not be a party to that.

Tea Party-here I come. In 2022, I will not give one Republican my vote! I am done. I have had enough of them. The only way they will keep me is to rescind their votes. If they choose not to or can’t, that is their problem – not mine.