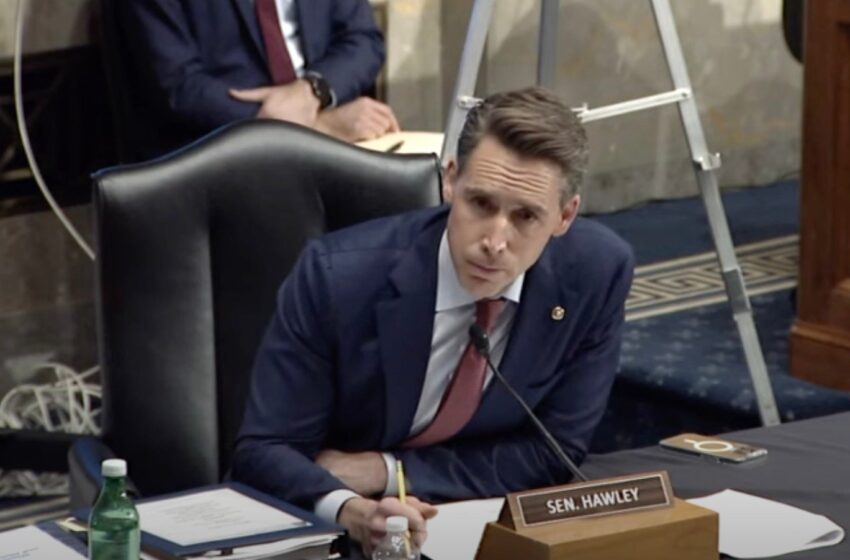 On Thursday, FBI Director Christopher Wray, along with Secretary of DHS Alejandro Mayorkas, and Director of the National Counterterrorism Center Christine Abizaid, spoke before the Senate Committee on Homeland Security and Governmental Affairs about security threats facing the United States.

During the hearing, Senator Josh Hawley (R-MO) roasted FBI Director Chris Wray for leaving a statutorily-required committee hearing early so he could go on a vacation.

Wray claimed he had “other business” to attend to and couldn’t stay.

“You were at the Senate Judiciary Committee. You remember that I think so. We had to cut that hearing short. We’re supposed to do two rounds of questions. You said you had to be somewhere, so we cut it short. Republicans were not able to ask second round as we had been informed we would,” he continued.

“The press reported shortly thereafter that the reason that the hearing had to be cut short is because you were flying on a Gulfstream jet for a personal vacation in the Adirondack. Please tell me that’s not accurate.”

Hawley: “So you were going on vacation?”

Wray: “I was, yes” pic.twitter.com/RZLlvdoKwN

Sen. Hawley went on to criticize Chris Wray for politicizing the FBI under his watch, based on the statements from the whistleblowers.

Below is the transcript:

Hawley: Whistleblowers who have come forward to members of this body, to members of the House. The FBI has been sending more than, in one instance, a dozen armed agents to the rural Pennsylvania home of a Catholic pro-life demonstrator to arrest him at gunpoint in front of his children in the early morning hours, despite the fact that he posed no risk of violence or threat and had previously offered to turn himself in.

Numerous whistleblowers and field agents have alleged that DC, your headquarters, has pulled them off working on child sex abuse cases, working on human trafficking cases in order to work on January 6 matters. For this reason, to give the appearance, they say they say that there are hundreds of new domestic terrorism cases in the country when in fact, there are not.

Whistleblowers and field agents have also said that DC has ordered the use of SWAT teams on nonviolent suspects who may have attended the January 6 rally, and they have been ordered to conduct surveillance and knock on doors of people who were not even in DC on January 6. And again, all of this, according to the whistleblowers, these are your agents, all of this in order to make it look as if there’s a mass